What is the Best String Instrument For Me?

So, you've decided that you'd like to learn a string instrument. Great choice! Playing a string instrument — be it a bowed instrument like violin or cello or a plucked/strummed one like guitar or ukulele — can be immensely rewarding, whether you have professional aspirations or are just learning to play music as a hobby.

Which instrument to choose, though? Here at Shar Music, we're partial to the violin family of instruments – that is, violin, viola, cello, and double bass – and it's where our greatest expertise lies. With that in mind, we're going to focus on those options today, but don't take that as a slight at the guitar, mandolin, dulcimer, or any of the other great instruments available to learn!

The violin family has a fascinating history than spans centuries. While these instruments are most closely associated with classical music, they've also featured prominently in blues, jazz, country, bluegrass, progressive rock… you name it! Recently, artists like Ezinma (who, incidentally, is an ambassador for Shar's Young Strings of America program) have also incorporated violin into modern hip-hop and R&B. Classical music is an ideal foundation for learning these instruments, but as you can see, there are plenty of places to go from there!

What follows is a rundown of the pros and cons of each bowed string instrument in the violin family. It's a tricky choice, with lots of factors to consider, but this should be a good place to start! 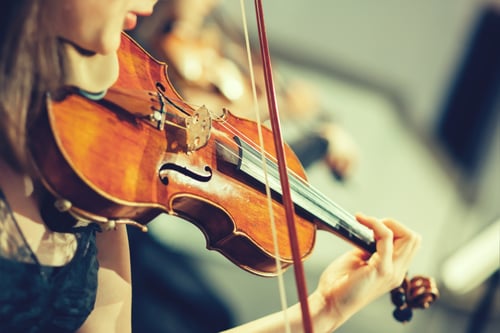 The violin is the smallest instrument in the violin family and, of course, its namesake. Curiously, viola was originally considered the "standard" size of the instrument family, but perceptions shifted as composers and musicians alike gravitated more to this small wonder.

The advantages of the violin are many. First, it comes in a variety of sizes, expressed as fractions (1/16, 1/10, 1/8, and so on up to 4/4), meaning a very young student can find an instrument appropriate for their body and hands. Even the largest violin is rather small, making it one of the easiest instruments to transport. Its strings are also less costly than those of its larger siblings.

Learning the foundations of playing violin also gives you the upper hand if you ever switch to viola, cello, or bass, as many of the fundamentals apply across the entire instrument family.

More than anything, though: violins just make a lovely sound. The highest pitched of the violin family, the instrument has a rich sound that can carry across a concert hall and soar above an orchestra.

Viola is the second-smallest instrument in the violin family, and too often gets short shrift among musicians. However, that makes it an extremely smart instrument to pursue if you're considering a professional career: even if it's less popular than its smaller counterpart, most orchestral music and string quartets still call for viola, so violists are always in demand!

The techniques for bowing, stance, etc. associated with the violin more or less apply to the viola. The sound is an octave lower than that of the violin, making it something of a middle ground between the high, singing tone of the violin and the more stately, stentorian sound of the cello. Size-wise, it lives in that same middle ground.

Smaller hands might do well to start on violin and adapt to viola later, but if your body is ready for it, the viola is a wonderful and underrated instrument! 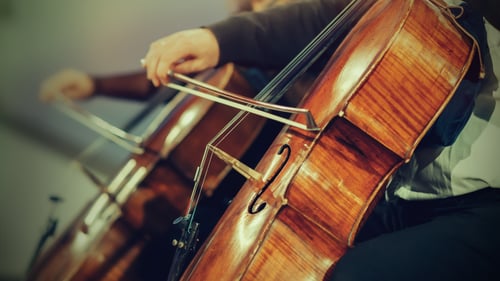 We think you better sit down for this one. Really, though: unlike the violin or viola, which are equally well-suited to standing and sitting positions, the cello is almost always played sitting. It's too large to hold up for extended periods, and simultaneously not tall enough for most adults to play without being unreasonably hunched over.

If that sounds like an inconvenience, it's worth it for the sound! Cello is the second-largest, second-lowest instrument in the violin family, and its tonal range skates between the high and low. This means it lends itself as much to high-end pizzicato and keening melodic leads as it does to sturdy bowed/plucked basslines.

Cellos aren't nearly as convenient to transport as the violin and viola, and both the instrument and its strings are significantly more of an investment. Still, for those dedicated enough to overcome those stumbling blocks, it's a supremely satisfying instrument to learn and play.

The bass (also known as the upright bass or double bass) is the biggest, lowest, and most expensive instrument of the whole violin family. As tall as an adult person, a bass can be a bear to get around, and it takes some adjustment to get used to the way one leans over the instrument to play it.

But what a sound! The bass can still be tender on its high end, but is essential to get those low lows. Though it will always have its place in classical music, the bass is debatably even more integral to the sound of jazz. Many of the instrument's most iconic players of the last 100 years, from Jimmy Garrison to Charlie Haden to Charles Mingus, worked to define the sound of the bass in jazz in the mid-20th century. That bass sound, in turn, defined the music as a whole for decades!

As with the viola, bass is an especially smart move if you're considering a professional career. Due to the challenges of learning to play and transport such a large instrument, bass is a road less traveled, but those determined enough to master it will find themselves well rewarded.

Still not sure which to choose? Shar is always happy to help. Give us a call or email and we'll do our best to share out insights. If you've settled on an instrument, check out these videos about how to choose the right size instrument for a growing player!