"What is the Earliest Bowed String Instrument?" and Other Tricky Questions

If you play a string instrument – be it a violin family instrument like what we sell at SHAR Music or an electric guitar, a harp, a European lute, what have you –  at some point during your musical practice you’ve surely wondered to yourself: “just where, when, and why did people come up with this idea?”. Let’s face it: playing a string instrument is kind of weird when you think about it, and debatably even weirder when the strings were made of an animal’s intestinal lining! It raises a lot of questions: how did humans start playing string instruments? What was the first string instrument? When did bows come into play, and what is the earliest bowed string instrument? Why do we play a violin or viola under the chin?

Unfortunately, many of the answers to these questions are murky at best. The history of the violin family – violin, viola, cello, and double bass – as we know them is reasonably well documented, but the story of how we got to that point is much longer and spans the entire planet! With that in mind, let’s just scratch the surface on the development of stringed instruments, to get a bit of a better idea of how we got to where we are today. 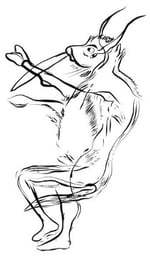 Reproduction of the cave drawing at Trois Frères cave. Source: Thinking on Music.

The earliest probable evidence of a string instrument dates all the way back to 13000 BC. A cave painting in the Trois Frères cave in France depicts what appears to be a musical bow, or more specifically, a hunting bow being used as a one-string musical instrument. This interpretation has been contested, though: it looks like it could just as easily be a weapon, or even a flute!

Many historians instead point to developments in western Asia around 4000 BC as the true genesis of string instruments. This was around the time that harps, lyres, citharas, and lutes were first introduced. Among the earliest physical evidence of string instruments that archaeologists have found are the Lyres of Ur, some pieces of instruments discovered in 1929 in Ancient Mesopotamia/modern-day Iraq.

One of the Lyres of Ur, known as "The Queen's Lyre". Source: Wikimedia Commons

Fast forward a few thousand years, and we start getting closer to the violin family. It is believed that the rebec, an instrument from the 10th century Middle East, was the first to be held under the chin while played. Around the same time, that the earliest string instruments to be played with a bow also originated in Central Asia. The trend spread to Eurasia from there, eventually leading to a revolutionary stage in the history of string instruments in Europe. Still, it takes a couple hundred years to get to the instruments we know and love.

One direct ancestor to the violin might be the polnische Geige (Polish fiddle), which was acknowledged in writings as early as 1545. Then came the Renaissance instrument the lira da braccio, which gets awfully close in form to modern violin (though it had more strings and was typically quite a bit bigger). This instrument had the arched modeling of the belly and back of a violin, the shallow ribs, the fretless neck and, most notably, the soundpost one associates with the violin family. Now we’re getting somewhere! 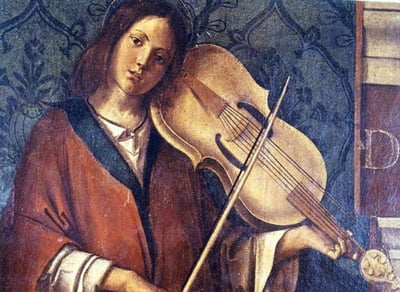 Soundposts are unusual outside the violin family (although they were later used on the viola de gamba); that little wooden rod, in fact, is most effectively responsible for the violin’s lively response and singing tone, because it extends the resonant vibrations throughout the whole instrument.

The earliest violins immediately differentiated themselves from another direct antecedent, the treble viol, with their richness of tone and sharp attack. Once the early Italian makers (most notably Gasparo da Salò, Andrea Amati, and Giovanni Paolo Maggini) codified its proportions, the instrument was quickly adapted by the Florentine school of composers, who were fascinated with its unique soloistic capabilities. 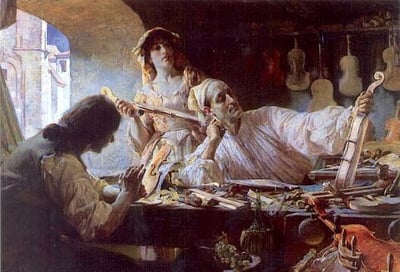 A scant few decades later, along came Antonio Stradivari, and with him came the violins that are still a gold standard today. Born in Cremona, Italy in 1644, Stradivari is said to have learned his craft from Andrea Amati’s son, who lived in the same town. Upon creating his first violin at the age of 22, Stradivari dedicated his entire life to crafting the most beautiful instruments his hands could muster. He also made cellos, guitars, lutes, and mandolins, and changed the shape of the bow into its modern iteration. Stradivari’s instruments, of course, are still beloved and used as a model to this day, defining the violin’s shape and sound.

From Stradivari’s example, of course, came the innovations of Giuseppe Guarneri, the essential contributions of German shops like E.H. Roth, Stuff Smith’s early jazz experiments with electric violins, and a litany of other creative leaps forward. And that’s just the violin family! The history of string instruments is broad and fascinating; the more you learn, the more exciting questions there are to answer.