The Love Life of Giacomo Puccini

Amazon Prime recently released the pilot for a new series based on the book Mozart in the Jungle (watch here for free). So far, it's all about the bad behavior of classical musicians in New York (well, along with a charming underdog story). It looks like it'll be a terrific series, but we at SHAR just wanted to point out that bad behavior and musicians are as old as... well, music. Here's a brief blog article on Giacomo Puccini's love life. Puccini didn’t just write opera; he lived it.

The famed Italian composer Giacomo Puccini was known for churning out fabulous operas in the verismo style. I could go on and on about La Boheme, or wax poetic about the iconic melodies in Madama Butterfly, or give details of how his critics viewed his music . . . or I could cut to the chase and tell you what you’re obviously dying to know: the shocking details of his love life.

And let me tell you, it is shocking indeed. Especially for the late 1800s and early 1900s. (It's even more shocking than Claude Debussy's love life. Trust us.)

So the story goes like this. Once upon a time, in the fall of 1884, Puccini fell in love with a lady named Elvira Gemignani in Lucca, Italy. Minor issue: Elvira was married to another guy named Narisco Gemignani, who was Puccini’s ol

d schoolfriend. But Puccini probably thought his lady’s marital status wasn’t that big of a deal, because Narisco was a ladies’ man himself and the Gemignanis were not happily married. So Elvira and Puccini pursued their relationship and Elvira became pregnant. This really disappointed Puccini’s sisters, one of which was a nun, and brought disgrace and scandal to the conservative, small town of Lucca. Elvira’s husband Narisco became enraged at their affair (double standard, anyone?) and threatened them so often that they had to keep their location a secret. In 1886, she went into hiding when the pregnancy started to show and gave birth somewhere outside of Lucca to a son, Antonio. Shortly thereafter, Elvira moved in with Puccini, bringing along her daughter Fosca from her previous marriage to Narisco Gemignani.

They should have had the embodiment of quiet family life, right? With Elvira, Puccini, and two children settled down in a small town? But this was not to be the case. Elvira had evolved into a nagging, jealous, slightly crazy lady. We shouldn’t blame her too much, because Puccini fell for another woman. In 1900, he had philandering eyes for a young lady named Corinna (our sources said that her last name or exact age are unknown). Puccini instantly fell for Corinna and they began an illicit tryst. Elvira did her best to stop Puccini from seeing her, even throwing temper tantrums and going on hunger strikes. Eventually, Puccini got caught red-handed. He had told Elvira that he was going “hunting,” when in fact he was on his way to pay Corinna a visit. Elvira suspected that he was full of it and decided to follow him, and caught Corinna on a carriage on her way out of town. She ran to Cori

nna and started assaulting her with her umbrella; the carriage whipped away to avoid Elvira and her antics and she ended up in a ditch (probably face-down). She raced Puccini home and made it there before he did. When he arrived home from his “hunting” trip, she proceeded to confront him, mostly with her fists and fingernails. When he had scratches all over him the next day, he shrugged it off by saying that he fell into a bramble bush, but nobody seemed to believe that.

Remember, all these years Elvira is still married to her husband Narisco, but living with Puccini. Instead of Elvira divorcing Narisco, it so happened that in February 1903 he got killed. Narisco was supposedly killed by the husband of a woman that he had an affair with. How convenient. So that paved the way for Puccini and Elvira to be able to marry. After Narisco Gemignani died, Puccini’s sisters (especially the nun, Iginia) begged him to marry Elvira and legitimize their son, Antonio. Perhaps because Elvira wasn’t the most stable partner ever, Puccini wasn’t really into this idea. To complicate matters a little further, Corinna and Puccini had a few fights, partly because Corinna was seeing someone else on the side, Puccini sent her some scathing letters, and then Corinna threatened to sue for false promises. Eventually, after being with Elvira for nearly eighteen years, Puccini capitulated, paid off Corinna to make her go away, and signed on the dotted line to marry Elvira. They were married on January 3, 1904, a week after Puccini finished Madama Butterfly and after the ten months of Elvira’s legal widowhood were complete. “Iginia will be glad,” Puccini wrote.

However, getting married hardly solved their issues. Their marriage definitely had trust issues. Puccini continued to cheat, mostly with well-known singers. His infidelity would eventually include dalliances with Maria Jeritza, Emmy Destinn, Cesira Ferrani, and Hariclea Darclée. For Elvira’s part, marriage didn’t seem to help her chill out much either. Her jealousy and mistrust of Puccini were as apparent as ever. She would go through his stuff, accuse him of betrayal, follow him wherever he traveled and read his letters. In general, she stalked him like it was a full-time job.

We wish we could end this crazy story here, but alas, there is more… 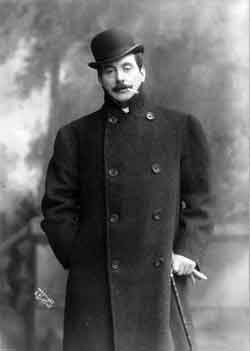 The Puccini family was wealthy enough to employ a maid to help around the house. The maid was named Doria Manfredi. In September 1908, Puccini sent word that he was returning to his villa in Torre del Lago, and asked Doria to open up and prepare the house for him. In doing so, Doria accidentally discovered Puccini’s stepdaughter Fosca (Elvira’s daughter), at the Puccini villa in Torre del Lago, in bed with the librettist of Fanciulla. This was also kinda scandalous because Fosca was married to an impresario Salvatore Leonardi. Before Doria could tell on her, Fosca decided to discredit Doria and told her mother Elvira that Doria was having an affair with Puccini. So Elvira was convinced that Doria and her husband were sleeping together. Both Puccini and Doria denied Elvira’s accusations, but she didn’t believe them. Doria tried to get Puccini to help her, telling Puccini about Fosca’s plotting against her to cover up her own cheating with the librettist. Puccini told Doria he’d try to sort it out for her. Nonetheless, Elvira was enraged at this supposed-affair and she took it out on Doria. She stalked her, called her a slut in

public, and showed up at her house to verbally abuse her. Doria’s family also issued threats towards Puccini, for supposedly defiling Doria (despite them both denying the affair). Doria must have suffered at lot, because she committed suicide. She got a jar of corrosive disinfectant. She swallowed it and died after five days of excruciating pain. It’s believed that Puccini’s real-life drama was used in developing his operas; one of his great operas, Turandot, has a slave girl character named Liu who dies tragically by suicide.

The aftermath of Doria’s death was not a pretty scene. Puccini even contemplated suicide, but as far as we know he didn’t attempt it. Elvira was unremorseful. As if she hadn’t already caused enough damage, she then spread rumors that Doria had died after a botched abortion. Doria’s family discovered that Doria had died a virgin after receiving autopsy results. In light of this evidence, Doria’s family then pressed charges against Elvira for slander. After a highly publicized trial, Elvira was sentenced to more than five months in prison. But Puccini stepped in. He had his lawyers convince Doria’s family to drop the lawsuit, paid off the Manfredi family, the court nullified the conviction, and Elvira didn’t have to serve any prison time.

You might wonder, why did Elvira get so nuts over the alleged Doria-Puccini affair? She must have been suspicious for a reason, right? Well, it turns out that her instincts were onto something. Puccini was indeed having an affair (big surprise…), but it was not with Do

ria. According to documents found in 2007 in the possession of a Manfredi family descendent, Puccini was having a liaison with Doria’s cousin, Giulia Manfredi. These documents allude to an illegitimate child that was born to Giulia Manfredi and Puccini; these papers were discovered in the possession of Puccini’s alleged granddaughter through the Giulia-Puccini relationship. In light of this affair between Doria’s cousin Giulia and Puccini, Doria’s suicide makes a little more sense. She knew she was innocent and she knew about Giulia and Puccini’s affair, but she was unable to tell the public that she was innocent w

ithout selling out both her cousin and her employer Mr. Puccini, both of whom she cared about.

Elvira and Puccini broke up for awhile after the tragedy and lawsuit, but then Puccini returned to his wife after their separation. Who knows why they stayed together? Maybe they deserved each other? All the while, Puccini kept up his relationship with Giulia Manfredi until his death in 1924 (allegedly, their illegitimate child was born in 1923, but was sent away and never knew who his father was).

Puccini didn’t just write opera; he lived it. We’ll probably never know all the facts for certain. All we know for sure is that all their entanglements, infidelity and rage makes for a quite a story.

If you’re intrigued, you can learn more details about this drama through viewing a movie that was made in 2008, called Puccini and the Girl (Puccini e la fanciulla).