The Love Life of Claude Debussy

Amazon Prime recently released the pilot for a new series based on the book Mozart in the Jungle (watch here for free). So far, it's all about the bad behavior of classical musicians in New York (well, along with a charming underdog story). It looks like it'll be a terrific series, but we at SHAR just wanted to point out that bad behavior and musicians are as old as... well, music. Here's a brief blog article on Claude Debussy's love life. Gossip away, readers.

We often talk about composers’ greatness and genius when it comes to their craft. Sometimes we don’t know about or choose to ignore their private personal lives. Well, that’s a mistake, because scandalous love lives are rampant in the classical music world. These juicy stories pale in comparison to the tabloid magazine stories you see in the grocery store checkout line. How juicy are these stories? There are tales of Verdi having an affair with an unmarried soprano in conservative, small-town Busseto, and this lady reportedly took to the stage unmistakably pregnant four separate times (eventually with the children reportedly being left at orphanages). There are whispers of Stravinsky hooking up with Coco Chanel (they even mention it in a movie, Coco Chanel & Igor Stravinsky). There are stories about Richard Wagner wooing Cosima, who was Liszt’s daughter and the wife of Wagner’s good friend Hans von Bülow. Wagner and Cosima went on to have a few children (while Cosima was still married to Bülow) and later on Cosima would find herself trying to thwart Wagner’s attempts at flings with other women. However, these pale in comparison to Debussy’s multiple affairs, some of them with married women. 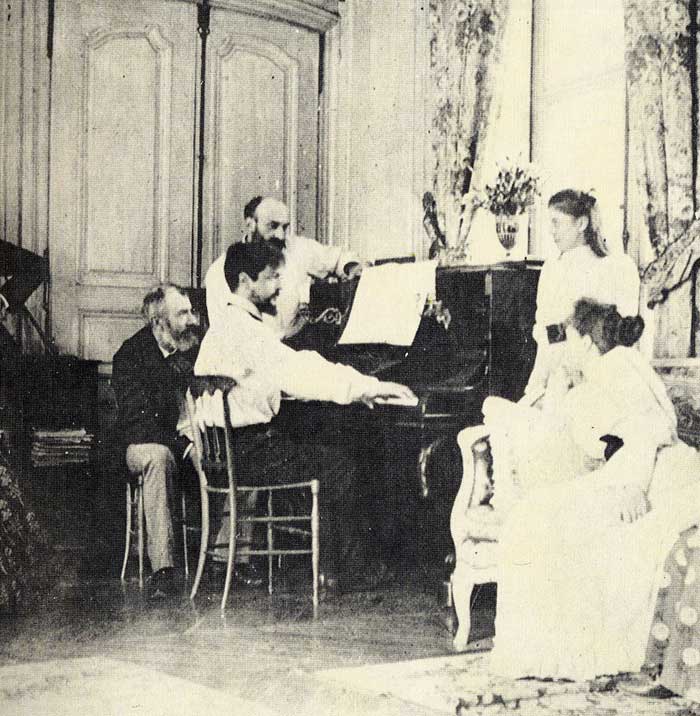 Debussy got an earlier start to his salacious life than most at the ripe old age of 18 years. He had an affair with a married woman (need more details).

Eventually, Debussy left Dupont, not for Therese Roger, but rather for Dupont’s friend, Rosalie (Lily) Texier. Got all that so far? Okay, so this is where Debussy takes the plunge and gets married. He married Texier in 1899, but that didn’t mean that all of the sudden he had a picturesque life of domestic bliss. Both Texier and Debussy had a habit of threatening suicide to one another if it didn’t work out, so you can imagine how healthy that relationship was...

Five years after his first marriage, Debussy took up with Emma Bardac, who was married to a Parisian banker at the time. Emma also happened to be a former love interest of Gabriel Faure! Debussy was introduced to Emma by one of his students, Raoul, who was Emma Bardac’s son. He began a secret affair with her. Perhaps in order to win Emma over, or distract Texier from the fact that he’d met someone else, he took Emma away on vacation. Yeah. We all know what happens on "vacation."

So Lily Texier got wind of Debussy’s shenanigans, and she then attempted suicide. After that there was scandal and hostility all around; they both experienced public alienation. Debussy also experienced alienation from his friends. It must have been a difficult and lonely time for him. So in spring 1905, to escape the hostility, Debussy & Emma Bardac fled to England. At this point, Emma realized that she’s pregnant (and they’re both still married to other people). Luckily, their divorces to previous spouses (Lily Texier & the Parisian banker) got finalized.

Emma Bardac & Claude Debussy eventually returned to Paris after their foray in England. Their daughter Claude-Emma was born in Paris in October 1905 (Debussy would affectionately nickname her ‘Chouchou’). Claude-Emma’s parents married each other in 1908. They stayed married until Debussy’s death in 1918. We’re guessing that they had minimal cheating in that marriage, but who really knows?

Hopefully that all makes sense. We were pretty close to having to draw a diagram to explain all of the craziness that comprised Debussy’s love life. Take that, National Enquirer! Next time a scandal like this makes the news, we’ll have to tell you all about Puccini. Boy, is there a story there…