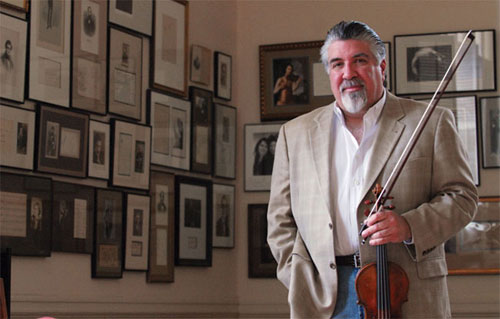 "The Presto Impluse bow is remarkable. I was amazed at the response, clarity and tone it produces. This is a serious endorsement from me, as I have always shunned carbon fiber bows due to their lack of an "organic" feel. This bow feels and responds like a first rate bow in many ways. It doesn't produce a buttery tone like a great Pecatte or Simon, but it's the next best thing. Congratulations to Shar on a wonderful achievement." - Andrés Cárdenes 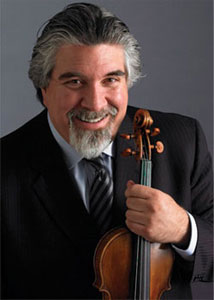 Andrés Cárdenes - appointed Concertmaster of the Pittsburgh Symphony Orchestra by Maestro Lorin Maazel in 1989 and departed after the 2010 season to concentrate on his conducting, solo and chamber music careers. Mr. Cárdenes has twice served as President of the Jury of the Stradivarius International Violin Competition and will be on the Jury of the 2011 Tchaikovsky International Violin Competition in Moscow.

Since capturing the Silver Medal in the 1982 Tchaikovsky International Violin Competition in Moscow, Mr. Cárdenes has appeared as soloist with over one hundred orchestras on four continents, including those of Philadelphia, Pittsburgh, Los Angeles, St. Louis, Moscow, Bavarian Radio, Helsinki, Shanghai, Caracas and Barcelona.

This year and next Mr. Cárdenes continues his project to record many standard and contemporary concerti. Released in 2009 were recordings of concerti by Brahms, Mendelssohn, Beethoven, Barber, and David Stock on the Artek and Albany labels. The complete works for violin by Leonardo Balada are now available on Naxos. Plans to record Bartok's Second Violin Concerto and the new version of the Viola Concerto are slated for 2011, along with other sonata recordings with pianist Ian Hobson, the complete Sonatas by Hindemith on Artek, and the Beethoven Violin Concerto on Zephyr, will be released in the spring of 2011. Cárdenes' discography includes over two dozen recordings of concerti, sonatas, short works, orchestral and chamber music on the Ocean, Naxos, Sony, Arabesque, RCA, ProArte, Telarc, Artek, Melodya and Enharmonic labels.

As teacher of highly gifted students, he follows teacher and mentor Josef Gingold's legacy and discipline. Cárdenes holds the title of Distinguished Professor of Violin Studies and the Dorothy Richard Starling/Alexander Speyer Jr. Endowed Chair at Carnegie Mellon University's School of Music. In addition, Cárdenes gives Master Classes regularly at the Royal Conservatory of Music in Toronto, the Manhattan School, Cleveland Institute, The Curtis Institute, and at virtually every major university and conservatory in the United States.

A Cultural Ambassador for UNICEF from 1980-1991 and an indefatigable spokesperson for the arts, Mr. Cárdenes has received numerous awards for his teaching, performances, recordings and humanitarian efforts, most notably from the cities of Los Angeles and Shanghai and the Mexican Red Cross. He was named Pittsburgh Magazine's 1997 Classical Artist of the Year and received the 2001 "Shalom" Award from Kollell's International Jewish Center for promoting world harmony and peace through music.