Editor's Note: The following blog post originally appeared on Arnold Steinhardt's blog In the Key of Strawberry and is republished with permission. Steinhardt is the founding member of the Guarneri String Quartet and the author of two books: Violin Dreams and Indivisible by Four. For more stories visit here or follow on Twitter. 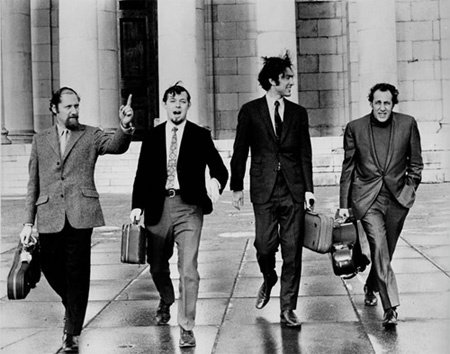 Not long before I graduated from the Curtis Institute of Music in 1959, John Dalley, a fellow violin student, asked me whether I’d like to work on Beethoven’s late String Quartet in B Flat, Opus 130. The Paganini String Quartet had recently performed at the school, ending their program with another late Beethoven Quartet, Opus 132 in A Minor. I had never heard the A Minor Quartet before, but sitting with the other students in Curtis Hall awaiting the performance, I expected music of the highest order. This was our great Beethoven after all. But Opus 132 transported me far beyond its stunning craft and originality. Especially during the slow movement in which Beethoven gives thanks to God for having recovered from an illness, I had the odd sensation of having left my life of ordinary experience behind. I felt like a space traveler visiting areas of unimaginable breadth and substance.

I accepted John’s offer eagerly. Without quite knowing what I was getting into, I must have hoped for another late Beethoven experience. John asked whether we could choose the original last movement, the Grosse Fuga (Great Fugue) rather than the one Beethoven later wrote as a replacement. He explained that the Grosse Fuga was so shocking and unintelligible on first hearing that Beethoven’s publisher asked him to write a substitute movement. My pulse quickened. This might just be my next other-worldly adventure. With John Dalley, first violin, me second, Jerry Rosen, viola, and Michael Grebanier,* cello, four highly enthusiastic but inexperienced students, we began rehearsing soon after. Opus 130 has six movements rather than the usual four. One by one we read as best we could through each of them.

Four slow, hushed, but suspenseful notes in octaves and unison opened the first movement’s, Adagio ma non troppo. The voices blossomed gently into rich harmony and flowed forward in stately, almost processional fashion. I assumed this to be an introduction to the main Allegro that burst forth with notes rushing headlong under a five-note figure that seemed like a military call to action. (Was Beethoven summoning us?) A second theme began as soaring melody and then veered into scurrying clusters of sound. Throughout the movement, shards of the opening music- no introduction after all- appeared again and again as evocative flashbacks. It somehow reminded me of the cubist painters who visually sliced up a subject in order to create an entirely different kind of reality. Imagination. Substance. Daring. This was the Beethoven of my dreams. I expected nothing less from the other movements as I turned the page.

To my surprise, Beethoven had decided instead on fun and games for the second movement. The Presto’s mood was sparkling, giddy, even recklessly jaunty, but then came yet another surprise. The party mood was jarringly interrupted mid-way by unabashed buffoonery in the form of odd scales, eccentrically drawn-out notes, and peculiar outbursts- a circus clown playing the fool for laughs with pratfalls. The movement’s high spirits were irresistible at that first hearing, but also inexplicable. How could these first two starkly different, seemingly disconnected movements exist side by side?

The third movement presented us with an altogether different mood. Clippity-clop went the good-natured and affable opening rhythms. Fragments of good-natured melody surfaced here and there, interspersed with clusters of playful running notes. We had left the circus (on horseback?) and were now traveling leisurely enough through bucolic countryside.

With the fourth movement, I braced myself for yet another surprise, but not much of one was forthcoming. The Allegro assai, subtitled Alla danza tedesca (In the manner of a German dance), was nothing more or less than a simple rustic melody repeated in various disguises. You might say that our horses had happened on a peaceful summer outing filled with singing and dancing by the local inhabitants. The movement exuded warmth and goodwill, but that unsettled me on first reading. Where was the visionary Beethoven, the man whose late quartets by reputation traveled into unexplored depths of feeling and experience?

The Cavatina, Adagio molto espressivo, the movement that followed, began with a simple rising and falling of the second violin’s first notes, and then eased into hymn-like four-voiced music of heart-felt beauty. The word Cavatina originally described a short song of simple character, but Beethoven re-imagined the form. The extended opening section, moving as it was, then led into one of the most deeply affecting moments in music. While the lower three voices laid down a ghostly pattern of repeated triplets, the first violin wove imploring but tentative notes far above, almost none of which coincided with the ongoing rhythm. The first violin served as a proxy for someone who seemingly had lapsed into disorientation and hopelessness. The effect was one of gathering desperation. Beethoven marked the word “Beklemmt” above this passage, loosely translated as “oppressed” or “anguished”. The music, almost unbearable in its utterly gripping message, finally released its hold and returned us to a slightly altered but no less affecting version of the original material. Then the movement ended with several pulsating chords dying away in melancholy resignation. Beethoven, although deaf at the time, was said to have wept upon hearing the Cavatina in his inner ear. This then, was my long wished for space travel- a voyage not outward bound but rather one into the recesses of the heart, mind, and soul.

And then from this exalted state, Beethoven opened the trap door and dropped us four wide-eyed students into a world of near chaos for fifteen minutes. The Grosse Fuga, the sixth and final movement of Opus 130, began with a twenty-four bar Overtura that lurched along in strange fits and starts. In effect, the Overtura was like a book’s index that previewed in brief everything to come. Then the fugue, actually a double fugue, burst forth- its two subjects often clashing violently and with painful dissonance. One subject with wild, leaping tones, the other with jagged, slashing cross-rhythms threatened over and over again to toss the movement into sheer anarchy. But suddenly, and without warning, the fugue stopped dead in its tracks. Apparently spent, it morphed into the most peaceful and thoughtful dialogue imaginable between the four voices, followed by a sweetly playful dance interlude. But dark clouds were gathering. The movement’s various subjects resurfaced menacingly, including a return of the fugue in ever more turmoil. The movement’s often bizarre and cut up nature reminded me of the first movement’s cubist nature. Then once again, small fragments of the movement’s subjects- the return of the book index?- made their quirky entrances before the movement finally gathered momentum, brushing away all past chaos, and rushed with manic elation to its end.

At first, critics called the Grosse Fuga “incomprehensible as Chinese” and an “indecipherable, uncorrected horror”. Much later, Igor Stravinsky saw it more clearly “as an absolutely contemporary piece of music that will be contemporary forever”. In years to come, I would begin to understand the Grosse Fuga in sober structural terms, but as its last notes rang out for the very first time for us, a feeling came over me that no other work has elicited before or since. The Grosse Fuga was more than music. It was an overwhelming act of nature.

John, Jerry, Michael, and I worked on Opus 130 for the better part of the school year. We discussed, we argued, we reveled in the miracle this music was, and we groaned over the technical and musical challenges it posed. Finally, we performed Opus 130 in Curtis Hall. In the Meno mosso e moderato section of the Grosse Fuga, a moment of peace in the eye of the storm that surrounds it, I was suddenly overcome with emotion. We had worked hard and the performance was going reasonably well. I looked up in gratitude at my friends who had shared in this great adventure. Big mistake. When I looked down again at the sea of notes before me, I had lost my place. For a few seconds that seemed like an eternity, I struggled to find my way back into the music. My lapse of concentration was embarrassing at the time, but I look back at it now with different eyes. In 1964, only some six years later, John Dalley- yes, the same John Dalley, Michael Tree, David Soyer, and I formed the Guarneri String Quartet that would perform Opus 130 and a host of other quartet masterpieces for the next 45 years. Without consciously realizing it, that first late-Beethoven encounter had changed my orientation and headed me toward the all-engrossing world of the string quartet.

I had lost my place in the waning moments of that student performance of Opus 130, but as it was to turn out, I had found it.

* P.S. Michael Grebanier, the cellist in our student group that tackled a late Beethoven String Quartet for the very first time, sadly passed away in December. He was my friend, my colleague, and a distinguished musician who was principal cellist of the San Francisco Symphony Orchestra for forty-three years. I mourn his passing.