Is Violin Hard To Learn?: A Conversation with Kiana June Weber 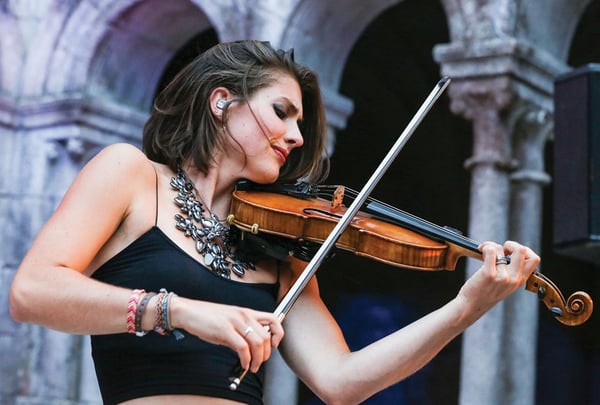 Given that we have so many great violins for beginners for sale (and yes, we believe they're the best beginner violins for sale online, or anywhere else), we can't fairly expect everyone to just take our word on this important question. Instead, we've tapped Young Strings of America ambassador and one of Shar's favorite violinists, Kiana June Weber, to field this topic!

Raised in Chelsea, Michigan — just a quick jog down I-94 from Shar's headquarters in Ann Arbor! — and starting her journey with the violin at age seven, Kiana June Weber has studied and performed with some of the top violinists in Michigan and the world at large. Since the dawn of her professional career, first regionally with her own group the Daughters of Newgrass, then nationally with the likes of Barrage, Carlos Nunez, and Gaelic Storm (the latter with whom she's performed on four Billboard #1 World Music albums!), she has shown herself to be an accomplished and adventurous player.

Weber has particularly made a name for herself in the world of Celtic fiddle, which is undoubtedly a big reason why she was tapped to play in the touring production of the Tony Award-winning Broadway hit musical Come From Away. Before heading out on her first tour with the production since COVID-19 shutdowns started in March 2020, we got her on the phone to discuss getting started on the violin, getting over rough patches, and tricks to get comfortable in your violin playing.

So, let's just start with the surface-level question: in your estimation, is playing the violin hard?

Well, I guess I'd have to answer yes, but I also believe that anyone can do it. We are all amazing creatures, and we can do hard things! It just takes a little bit of patience, especially the first part (of learning it).

Do you teach from the very beginner level?

Yes, beginners up through rather advanced, professional-level students. It's an interesting way to frame it, though, "is playing violin hard?". What's so cool about violin is that, as you learn it, it teaches you so much about what you are capable of doing if you set your mind to it, what you can do if you step back and set goals along the way. If you dedicate the time, it's all really possible, and the satisfaction you get is so high from it, even outside of all the fun musicmaking you get to do.

What kind of methods do you use to teach beginners?

The method is kind of my own, but it's very Suzuki-based. It's very much based in thinking of music like a language you learn using your ears. There's a lot of repeating back, mimicry, repetition.  As a fiddler myself, though, I also throw in fiddle tunes all the time. My students are playing fiddle tunes from day one. There's a lot of fiddling, lots of fun folk music.

What are the unique challenges to teaching fiddle music, as opposed to the classical repertoire?

Well, I think for beginners, the folk songs have more familiar melodies. Having that familiarity really helps. Some of the classical melodies that would have been very popular 100 years ago and be used in music education at that time are no longer part of our repertoire. Kids don't just know them, so I'd have to teach them the melody first, then teach them how to play it.

The challenge with folk music, though, is that it requires a lot of internal creativity. There's a lot of space for your own expression, which is so fun, but it can also be uncomfortable when you're newer to it. So, that's a challenge, but it's also a huge benefit of it!

When did you start playing yourself?

I started when I was seven.

It helps to start young, yes?

It does, but I also teach a lot of adult beginners, which is something I really enjoy doing. I think it's really beneficial at any age! 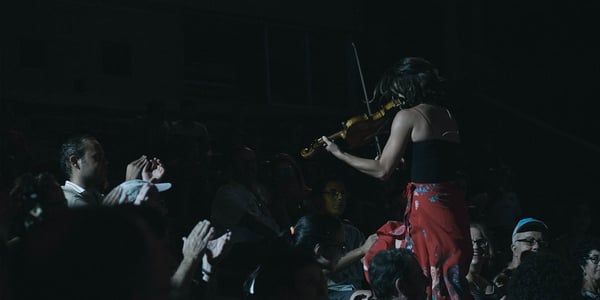 Kiana June Weber bringing it to the crowd live, taking a cue from another SE Michigan-raised musician, Iggy Pop ;-).

Was there a time, maybe early in your practice, where you got really frustrated and wanted to hang it all up?

Oh, absolutely! At least two times, I remember feeling like it was just terrible, I was done, I was going to quit. Thankfully, my parents encouraged me to stick with it just a little longer. They got me to keep going to lessons another couple months to see what happens. They got me through that patch.

It's important to have that.

Yes, you need to have someone in your corner, whether you're a kid starting out or an adult beginner! Also, having friends who are also doing it is a huge factor. That was another thing that kept me going: I had friends and extracurricular groups who inspired me. There was a little bit of healthy competition, but also camaraderie: you want to practice so you don't let your friends down in a performance. Even just being able to show up and complain to each other about it being hard, to commiserate, is helpful.

What would you say to students who are struggling to get to a certain point in their playing and are getting frustrated, and maybe even feel like giving up themselves?

I'd say first that I've been there, and I know what that feels like. I'm in their corner. I also think, though, that that's a great time to sit back and remember why you want to do this. That might mean pulling out your favorite recording of a violinist you find super-inspiring, or that one YouTube video that really motivates you. Maybe it's a track with a violin part in it that's really fun. Just something that motivates you! If you don't have that, maybe this could be the time to go find that. Go to a concert, watch something, but find that extra push!

Then, when you have that, I think you can come back to that feeling, then maybe make some smaller goals. I'm always telling my students: "okay, this feels really big and hard; let's find a really small thing that we can do just today". Just nail this one shift, and then you can go have a piece of chocolate cake or whatever! Start with those little goals, and you'll be surprised at how fast you chip away at it.

Do you have those things at this point in your career? Things you go to to get re-inspired?

Oh, yeah, and the collection keeps growing as you get older. That's one of the fun parts. I have playlists saved of tracks that I love, certain go-to musicians whose new albums I'm always looking forward to... these things get you inspired to practice all over again.

You're playing violin in the touring production of [Tony Award-winning musical] Come From Away. You're most frequently onstage with smaller ensembles and bands, and you're often a, if not the, star of the show. How is this different, and what challenges does it present?

Come From Away is a beautiful musical, but the challenges come from how fast-paced it is. It's also incredibly exact: there's so much riding on every little cue, to make it come off all at once. I'll have a solo, then when I hit this note, there's a lighting cue... there are a lot of things that happen in a sort of ripple effect. Being really consistent and keeping up with the show's pace are the things that are particularly challenging.

Going back to touring, though, is really exciting. It feels like such a big deal after the shutdown. Getting people out to shows is very important, and I'm really looking forward to telling this story! It's beautiful, and the music is really cool. It's all about this really fun Celtic fiddle music, so if you can picture that underscoring a Broadway musical, and that sounds like your jam, you should come see the show!

What else do you have on your plate right now?

I'm hosting a workshop on October 14 — I do at least one every month — called 'Zero to Fiddle in 60'. It's intended for classical crossover players looking to learn fiddle/folk music sounds on their instrument.

I've also been running an online Fiddle Club through Patreon that would probably be a great fit for most anyone reading this. There are new tunes every week, and tutorials which are accessible for just about any skill level. Plus there are extra little videos with inside tips with resources and tricks for playing the tunes.

There are a lot of adult beginners in Fiddle Club. There are weekly tutorials that allow people to practice in the comfort of their own home, then once a month we get together and do these sessions online that have been so fun. It started as something to do during lockdown, but we're going to keep going with it because it's the best practice tool I've ever accidentally stumbled upon!

Basically, I play the tunes live, and everyone plays along with me. You can see each other and have fun, but you can only hear me and yourself. It's a zero-risk practice situation: you get to have the fun of being in a session, without that fear of people hearing and judging you. So many adults have told me that this is what keeps them from going to sessions locally, or showing up to group classes: they're afraid of looking stupid. This gets rid of that fear entirely!

It's been so much fun, and I think it's a really great tool. Once you're relaxed and having fun, music just plays itself. It's so much easier. We really hope to find that every time we get together in Fiddle Club. We have a laugh, play through some tunes, and remember why we want to do this in the first place: not just because it's technically hard, but because it's really fun to play music with other people.