I stood in the artist’s dressing room, warming up nervously before my sole rehearsal with the Detroit Symphony Orchestra. For a twenty-two-year-old violinist just starting a career, performing Mendelssohn’s Violin Concerto with this distinguished group of musicians was an important engagement. My palms were sweating, my heart beat rapidly, and I began to pace back and forth. Grin and bear it, I said to myself. Everything will be all right once you start playing.

There was a knock on the door—undoubtedly the orchestra manager calling me on stage. I sighed with relief. At least the wait was over. I opened the door and stared in disbelief. Standing before me was perhaps the most famous comedian in all of America: Jack Benny. Benny, holding a violin case in his hand, wasted no time. “What’s this I hear about you making me look bad, kid?” I opened my mouth to say something but no sound came out. Benny continued unperturbed. “I was supposed to play the Mendelssohn. Now I hear you’re doing it. Never mind,” he said, brushing past me and placing his violin case next to mine in the dressing room. “I’ll do Sarasate’s Gypsy Airs instead.” My pre-concert nerves vanished, replaced by the sensation that I was in the midst of one of those improbable dreams of mine—in this case a private encounter with a man who reached millions of adoring fans on radio and television, a man who, without exaggeration, was an icon of American life and entertainment.

Then the situation took an even more surreal twist. Benny turned to me. “I’m working on a new routine," he said. “This is Mischa Elman trying out a new chin rest. Tell me if you think it’s funny.” Right, I thought to myself. The great Jack Benny wants my opinion about what’s funny—me, a mere fiddle player who forgets a joke’s punch line five seconds after it’s been told. I shook my head in disbelief. Benny took out his violin and began playing Saint-Saens’ Introduction and Rondo Capriccioso. Mischa Elman, one of the reigning violinists, would have been upset to be represented by what I heard. Elman’s opulent tone was legendary while Jack Benny’s was—how should I put this delicately—awful. Benny readjusted his chin with every little group of notes, never quite getting comfortable and appearing more and more irritated in the process. “Well, what do you think?” Benny asked, looking at me eagerly for approval. I burst out laughing. The skit was indeed very, very funny. Beaming, Benny put his violin back into its case. “Good,” he said. “Now let’s rehearse with the Detroit Symphony Orchestra.” As it turned out, I was to rehearse the Mendelssohn first for a regular subscription concert that night with Benny following immediately afterwards for his slated performance at the orchestra’s pension fund concert. 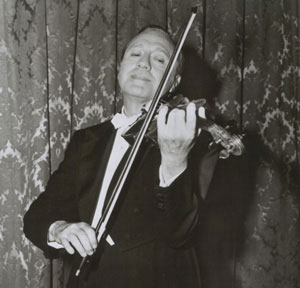 My rehearsal with the orchestra and its conductor, Paul Paray, went reasonably well. Afterwards, both elated and relieved, I settled into an audience seat and prepared to enjoy an unexpected fringe benefit of my Detroit concert. Jack Benny soon emerged on stage, greeted the orchestra musicians, and began to explain the comedy routine he had in mind. He turned to Mischa Mischakoff, the orchestra’s concertmaster. “Here’s what’s going to happen, Mischa. I’ll begin this little cadenza in my usual lame fashion, but you’ll interrupt me immediately. You’ll play the cadenza as beautifully as you can. Then I’ll turn to the audience and look unhappy because you’ve just shown me up. Understand?” Mischa Mischakoff, a great violinist and renowned former concertmaster of the NBC Orchestra under Arturo Toscanini, nodded. "Alright then. Let’s start Sarasate’s Gypsy Airs from the beginning.” Benny proceeded to play the virtuoso work as badly as possible, mugging shamelessly for the musicians’ amusement at every misstep. They could hardly hold their instruments much less play them for all the laughing that went on. Soon Benny came to the cadenza and Mischakoff, as planned, cut him off and began its swirling notes in masterful fashion. Halfway through, however, Mischakoff had a change of mind, probably due to all the laughing around him. He, too, would be funny. Mischakoff began missing notes and playing with more scratch than tone. Benny immediately waved his bow signaling the orchestra to stop. “Mischa. This is important,” he said as gently as possible. “I have to sound very bad. You have to sound very good. Otherwise it’s not going to work. Understand?” Mischa, looking somewhat bewildered, nodded again. “From the beginning once more.” Benny mugged and then Mischakoff interrupted him according to script. This time, he got at least three quarters through the cadenza in beautiful fashion. What a violinist, I thought to myself, "Pristine intonation, a silvery sound, and all the prerequisite instincts of a great soloist. But just then, to my alarm, Mischakoff faltered and lapsed into his old mistaken idea of comedy. I imagine that the presence of the great Jack Benny standing next to him was simply too much. Out came the shaking bow, the scratchy sounds, and the wrong notes once again. This time Benny never had a chance to open his mouth. The entire orchestra erupted in chorus, “No, Mischa! No!” Mischakoff, clearly rattled and miserable, stopped playing and looked to Benny for guidance.

What followed was a mini lecture on the nature of humor given by Jack Benny for the benefit of Mischa Mischakoff but taken in by all of us in the hall with rapt attention. For how often does one get to hear a master revealing his secrets? Benny spoke of the element of surprise, of the unexpected, of how comical it is to see someone with delusions of grandeur being exposed. “Don’t try to show me up, Mischa. Just do your job magnificently as if it’s no big deal. That makes it even funnier. Mischa, you see what I’m getting at, don’t you?” Mischa nodded his head vigorously. “Then once more from the top.”

Benny produced his train wreck of a performance once again and once again Mischakoff kidnapped the cadenza. This time he played soberly to the very end. The music rose ever higher, ever faster, effortlessly transported on the wings of Mischakoff’s fleet fingers. Then he hesitated artfully, fluttered bird-like for a moment on two alternating notes, and finally came to rest on a single high pitch that shimmered magically as though heaven bound. Jack Benny, the members of the orchestra, the conductor, and the small audience were mesmerized by the exquisite beauty of what we had just heard. No one moved, no one made a sound, and finally, Mischakoff, confronting a sea of silence around him, looked up unhappily and said, “I messed it up again, didn’t I?”

That night, tucked into my Detroit hotel bed, I reviewed the day’s events. Foremost on my mind was the Mendelssohn performance. I had played musically, but had there been enough magic? Felix Mendelssohn, the father of this exquisite concerto, would have been disappointed if I, a midwife of sorts, had not delivered his baby successfully. Then I thought of Jack Benny’s antics and chuckled in the dark. He had played the violin very badly and made us laugh, a magic of another kind. And finally Mischa Mischakoff’s siren sound began playing in my head. Definitely magic.

The events of that day, a tale of three violinists, took place almost fifty years ago. To my surprise, a bit of it is still retrievable. Someone who collects performances off the air recently told me that he has my Detroit Mendelssohn Concerto on CD and asked whether I would like a copy. I am not so sure. Do I want to know whether a half-century-old performance of mine had enough magic to it? Jack Benny’s comic genius from that era, the 1950s and 1960s, is certainly available for us to enjoy on a wealth of recordings and film. What cannot be retrieved from that Detroit day is Mischa Mischakoff’s performance of a cadenza lasting less than ten seconds. But no matter. In my inner ear, I can still hear Mischakoff’s silvery sound and that last shimmering, transcendent note of his. Believe me, Mischa. You didn’t mess it up.