The Ultimate Guide to Composer Sanity and Aesthetic Taste 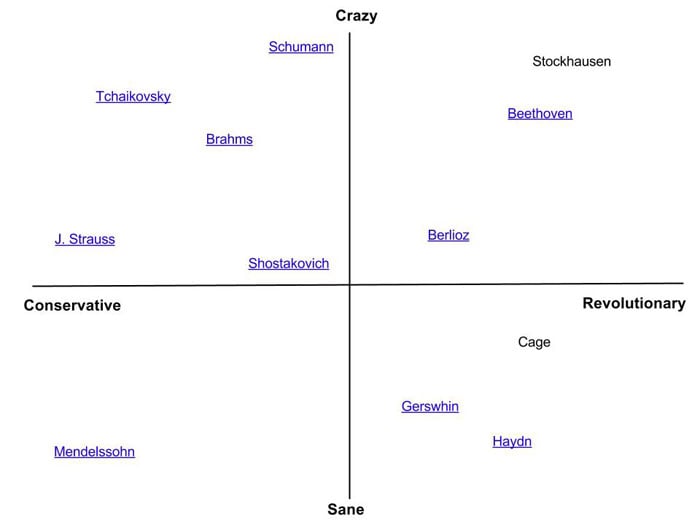 Felix Mendelssohn
As far as child prodigies go, Mendelssohn was pretty grounded and together. Felix and his three siblings were born with silver(ish) spoons; later he and his wife Cecile had five children of their own. Yawn. And although I love listening to/playing his music, Mendelssohn was also famously more cautious than some of his zanier contemporaries (ahem, Wagner). Double yawn.

George Gershwin
Gershwin’s life/personality seemed relatively normal; he was a Brooklyn-bred, first generation, high school dropout. And oh yeah, he was also sort of a musical genius. Although Porgy and Bess was initially slammed by critics, it was later lauded as one of the most important operas in history.

Franz Josef Haydn
Although Haydn had a bit of a rough start to his life, including bouts of starvation and homelessness, later in life he enjoyed wealth and fame in London and Vienna.  He was also described as likeable and humble — no easy feat for a prolific and successful composer.

I know it’s hard to view Papa Haydn as revolutionary in his musical contributions, but for us string players, but he was definitely a trailblazer... can you even imagine what our rep would look like if his string quartets didn’t exist?

Robert Schumann
I don’t have perfect pitch, but in my heyday in music school, I pretty much had an A440 stuck in my head at all times. Like me and George Costanza, Schumann went nuts over one note. (Remember this episode of Seinfeld?) All kidding aside, the reason he was institutionalized was because of severe depression. His works were fairly conservative in regard to form, but he helped push the boundaries of romantic music.

Johann Sebastian Bach
In his time, Bach was a name synonymous with “musician.” Being from a large family of musicians, Johann met and exceeded all of his expectations. Having never left Germany once in his career, he was a bit of a homebody. Besides conquering the study of counterpoint and being one of the greatest virtuosi ever, he was pretty much just a full-time family man.

Ludwig van Beethoven
Our favorite hearing-impaired composer places high on the crazy and genius/influential scale. He was definitely the tortured artist type — moody, passionate, and absolutely brilliant. We can thank him for bringing us into the Romantic era.

Johann Brahms
The mystery of his impoverished childhood has been debated — many think he may have been employed at the request of his parents in a dance hall. The circumstances of that appointment raise more questions regarding his very close relationship with Clara Schumann and his troubles successfully courting women. On many nights long-bearded Brahms could be seen in cheap clothes, walking with no socks on, to his favorite pub the Red Hedgehog. He would often hand out candy to children along the way. Despite his eccentricities, his music was labeled by the other half of the War of the Romantics as being “old-fashioned.” He admittedly focused on the study of counterpoint and imitation and development — much like his role-models, Bach, Haydn, Mozart, and Beethoven.

Dmitri Shostakovich
As a musician I feel like I have the right to say that MUSICIANS ARE CRAZY. Sure Shosty was often described as a bundle of nerves, and he even allegedly had some OCD, but he was a child prodigy and musical genius. I should also probably mention that he had to grapple with keeping Stalin happy and staying alive. With the cards he was dealt, I think Shostakovich was pretty together.

Shostakovich’s music is deeply emotional and restrained in the best way. Even though he’s pretty average on this particular matrix, he’s ranked high in my book.

Hector Berlioz
Because of his fascination with opiates, some of you may think Berlioz should be ranked higher on the crazy scale, but hear me out. If you heard that a famous rock musician did some drugs and then created a composition based on that experience, you would probably shrug and move on. Berlioz was just ahead of his time. After writing Symphony Fantastique and other works, we can thank Berlioz for significantly changing the instrumentation of the modern orchestra.

John Cage
In my opinion, there’s a "good crazy" and a "bad crazy." People who are bad crazy hurt people for no reason. People in the good crazy category think outside the box and have weird interests like Cage, who happened to be an expert of mushrooms (the funghi, not the drug).

Without a doubt, Cage was a leader in avant-garde music. Just looking at one of his pieces shows that the dude thought way, way outside the box. I’m pretty sure he’s the only person who could release a work of silence and still be super respected by the music community.

Johann Strauss II
Strauss was the tin pan alley composer of classical music. He came from a musical family; his father Johann Sr. and two brothers were also composers. When I think of a musical Austrian family I think of a happy bunch, but the Strauss’ were less like the Austrian Von Trapps (pre-war, of course) and more like the American Jacksons. Johann Jr. and his father were in serious competition, and we all know who won the title of "The Waltz King."

Karlheinz Stockhausen
His ex-friends would say Stockhausen totally belongs in a looney bin. After reading this article, I can understand why. Maybe there’s some bias in the article, but Stockhausen is at best portrayed as eccentric and delusional. I can’t even imagine what it was like to rehearse the the Helicopter quartet with Stockhausen, who is often described as a hot-tempered perfectionist.

Pyotr Ilyich Tchaikovsky
Tchaikovsky was known to be extremely sensitive and painfully shy. His anxiety began early in his childhood and continued in his adult life; there is speculation that he even ended his own life. The Russian composer made his most significant impact in ballet music, but his worship of Mozart influences his work's strict classical form.