The Importance of Music Education

Since our blog's been on a hiatus over the winter, it's been some time since we've had a chance to post one of Nerissa Nields's blogs. How we've missed her! And this blog is especially welcome since it addreses a subject near and dear to many of us at SHAR: music education. Nerissa makes the case that music education not only soothes us as infants but it helps bring together classrooms and families.

A few days ago, I had the pleasure of holding a baby just 10 days old. It was mid afternoon, and I was guessing her poor mama hadn’t really slept since the birth. Elle and I took turns cuddling the baby, while my friend crept upstairs for a much needed nap. After a few minutes, the baby began fussing. I picked her up, walked around the room, sang our version of “Hush Little Baby.” Still gritchy. I switched to “All the Pretty Horsies” and did a gentle canter-y gait. More fussing. Then I started in on Ledbelly’s “Bring Me Little Water, Sylvie.” The baby pulled her head off my shoulder (strong baby!) and stared at me as if in disbelief. She stopped crying and listened as I sang. When her mother came downstairs fifteen minutes later, I told her what had happened. 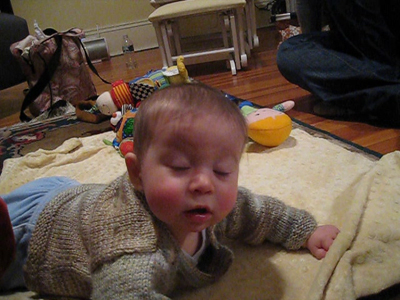 “No wonder,” said her mother. “We played that song and sang that song many times while shewas in the womb, and since birth."

I’d certainly heard of this happening–baby recognizing pre-womb music post-womb–and in fact, we wrote about this phenomenon in our book All Together Singing in the Kitchen: Creative Ways to Make and Listen to Music as a Family. But I’d never witnessed it so directly. (Well, maybe I did. Maybe it happened with my own kids, but I was so sleep deprived then, I have no recollection.)

Today in Jay’s Suzuki class the teacher had the four-year-old pre-twinklers form a circle. She played “pass the Twinkle,” playing the first line of “Mississippi Stop Stop” to the child on her left, who in turn, wordlessly passed it on to the child on his left, and so on, around the circle. “Isn’t it amazing,” she said. “How you all knew what to do, and could do it without even saying any words. Music is a language we can all understand.”

Plans for SOS-SOA are looking up. Emails are circulating. I am making phone calls, juggling schedules, refining our focus. Meanwhile, doing a lot of thinking about the role of music in our children’s lives. Why fight to keep music in the schools?

- It’s a language we all share.
- It cuts through reason and goes right to the heart.
- When I look back on my own school memories, so many of them have to do with music class, performing, practicing an instrument. Maybe that’s just because I am a musician, but I can’t imagine growing up without all the music I had.
- It unites a group of disparate kids
- It’s the only academic discipline that is equally left-brained and right-brained

What about you? What do you remember about music education growing up?

For more about music education, visit the National Association for Music Education.