Notes from a Suzuki Mom: Strengthening Family Bonds Through Music

We've had some great discussions on our blog about the value of a music degree, the difficulties of earning a living as a string player, and the importance of early music education. But what we haven't talked about is how much playing music can bring families together. Nerissa Nields of the folk band The Nields writes this on her blog: "There really is nothing like music to strengthen family bonds." She's reflecting on time spent with her parents, her sisters, her children and her niece, an evening in a mountain cabin when all three generations played and sang together, talked to each other with and through music. We're not sure there's a better argument out there for music education. 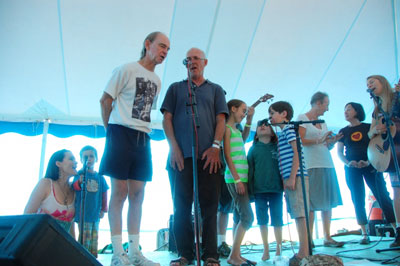 Last night, Katryna and I played a show for the Williamsburg elementary school – a sort of pre-opening end-of-the-summer hurrah. Because of the rain, the event was held indoors and families spread their blankets out on the floor of the gym to have their picnics. But within minutes, Katryna was teaching everyone "A Ram Sam Sam," and the room was full of big arm movements and waving. Hard to eat pizza that way. A little later, the sixth graders had bounded down from their seats in the stands and were front and center dancing to "Going To Boston." I kept thinking, "What an easy way to make people happy – just add music and dancing."

It’s been a very musical summer. We started off at Kripalu the week of July 4th and led a Family Music Camp there, complete with drum crafting, harmony singing, a trip to Tanglewood to see and hear James Taylor, and a performance at the conclusion, complete with a (Suzuki) string section and ukulele Orff. A few weeks later, we took our four kids to Falcon Ridge where they reprised their guest appearance with Guitarchestra (and violins) and joined us on "Mango Walk" – including the grandparents. 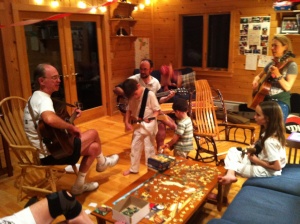 Most recently, we spent time with our sister and her kids and our parents in the Adirondacks. One night we put on a play for our father in honor of his turning 70; the kids made up most of it (it was a sort of hybrid of Harry Potter – the hero was Granddaddydore – and our own family mountain climbing lore). And we three sisters sang him a song with new words to "The Unicorn Song" (a feat taught to us by our dad and written about extensively in our book All Together Singing in the Kitchen). Later that week, we pulled out guitars and violins and Loogs and sang together: "Red River Valley," "Sweet Baby James."

There really is nothing like music to strengthen family bonds. I know we say this all the time – in fact it’s our mission in life to live this truth and teach it to others – but sitting there in our shared house in the mountains, playing guitar across from my niece, whispering the chord changes to her so she could follow along, and having that long, never-ending musical conversation, I was so grateful for every music class I have taken, every time I really listened to a record album, every scale I played on guitar or piano.