Getting the Most Out of Your Bow

Today we have another fine blog from our apprentice James Engman. James shares six tips that will help you maintain and care for your bow whether you're just starting out or an established professional.

As a young player becomes more experienced, their technical ability may begin to require a higher quality bow. The balance, weight, flexibility, and setup of a decent bow will allow a student to accelerate their formation of technique and tone. Just as a sharpshooter can’t perfect his or her aim with an old black-powder musket, a violinist can be held back by an inferior bow. However, the cost of a good bow can often seem unusually steep to first time buyers. It is easy to forget that the instrument in your right hand is just as much of an investment as the one in your left, and it requires just as much care, if not more. Therefore, a student should learn to care for their bow as it were a $90,000 Peccatte from the first time they pick one up. Here are six simple tips, for students and professionals alike, to get the most out of your bow.

1. Rosin the Bow!
Although a strand of horsehair appears smooth, it is actually covered in tiny scales and hairs. Not only does your rosin help the bow stick to the string, but it also protects its texture. Bowing without enough rosin or rosining a small area with too much pressure and frequency can smooth out the hair and ruin it. So, it is always important to keep the hair evenly rosined.

Fresh hair is most easily rosined with powdered rosin, but a cake of rosin can do just as well.To allow a cake of rosin to work better, scratch the surface with a dime in a cross-hatched pattern until it looks etched. Rosin new hair from frog to tip with an extra short motion over the six inches at each end, where rosin doesn’t stick as well. After about 15-20 strokes, test it on the strings. It should leave a white mark on the string, and grip along the whole length of the bow without being too “sticky”. After the first time rosining the bow, it is recommended to apply 6 strokes of rosin before each playing session, with a couple extra in the area where the bow has been played the most.

*Pro-tip*: When using a round cake of rosin, continuously rotate it as you rosin to prevent grooves from forming.

2. Maintain and Adjust Tension Properly!
Adjusting the tension of the bow is a skill to be perfected! When turning the screw with your right hand, hold the frog between your left thumb and first and second fingers. Do NOT hold the bow by the stick. Failure to hold by the frog can cause the eyelet to wear away at the inside of the stick, causing a “wobbly frog”, and can also strip the threads of the screw and eyelet, rendering the bow useless.

A bow should only be brought up to the tension needed to play at. It should always maintain curvature toward the hair, and never be straight or concave. Finding the ideal tension for each style of playing may take some experimentation. Once it is found, note the distance between the stick and hair, and the amount of pressure needed to touch the hair to the stick at the center. Most players prefer for there still to be a small space when playing fortissimo, but others like less tension.

When putting the bow back in the case, loosen the screw all the way without removing it (again, holding at the frog). The hair should be floppy and relaxed. If the hair is not slack when it is fully loosened, it may need to be rehaired. By loosening the hair, you are preventing warping. Warping ruins bows!

3. Thou Shalt Not Play with a Balding Bow! 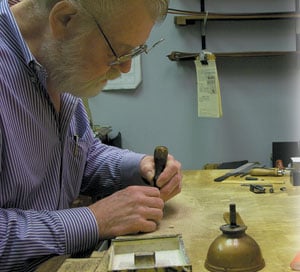 Every player looses a few hairs now and then, but as soon as there is a significant amount of hair loss from one side of the bow, stop playing, and get it rehaired! Tightening a bow with lop-sided hair for a significant amount of time can warp the bow, and a $60 rehair is cheaper than a $600 bow. A good rule of thumb is to get your bow re-haired when the wooden plug under the hair at the tip of the bow begins to show, though some would say that is too much loss already. Professional players and serious students might rehair their bow twice a year or more, but for young students, a bow can usually go 12-18 months before a rehair is necessary.

4. Don’t Tilt the Stick of the Bow When Playing Forte!
Many students are taught to tilt the stick of the bow away from themselves as proper bow technique. While this is okay for soft playing, the stick should always be directly above the hair when applying pressure (playing forte). Using a vertical bow-stick not only produces more sound, but is healthy for the bow. Applying pressure with a tilted bow will cause warping over time. Also, the stick might drag across the strings, wearing off the varnish and exposing the wood. Not only is this visually unattractive, but it leaves the wood on one side vulnerable to moisture in the air, causing it to expand and warp even further. This is a habit that must be constantly checked when playing.

5. No Bow Waving, Stand Tapping, Sword-Fighting, or Shenanigans!
It is a common practice among young orchestras to applaud soloists and conductors by tapping the bow on their stands or waving the bow in the air. This is dangerous for your bow. Hitting the bow against something can cause small fractures at the tip of the bow which could eventually split, destroying the bow. A better option is to set down your instrument and clap, or stomp your feet on the ground. Also, do not challenge your stand-partner to any duels.

6. Wipe Rosin Dust Off of the Stick After Playing.
Rosin dust can build up on the stick of the bow over time. By wiping the stick with a cloth after each session, you can prevent build-up which is difficult to remove. If build-up does occur, first try using a rag dampened with distilled water (being sure to keep the hair dry). If this is not a enough, a mild cleaner or alcohol is usually okay for most bow varnishes, but not recommended for the violin itself. If varnish is ever removed or worn off, have a skilled bow repairer put more on.

With these six steps, you should be able to make any bow last a lifetime and more!