Aren’t violins made to be heard? Why would you want a silent one, then? Well, silent violins have several advantages (besides just being fun to play!). Here are some thoughts! 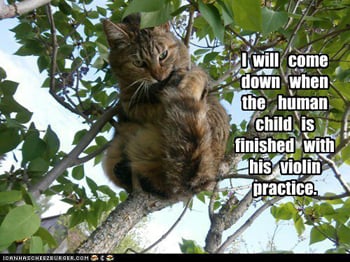 Silent practice. A silent violin is designed primarily to be just that: silent. Without the resonating chamber of a traditional violin, a silent violin won’t produce much sound when you play on it. However, you can listen to your sound through headphones! Therefore, if you need to practice but you don’t want to bother anyone with the sound, a silent violin can be a good option for you.

Input. Silent violins have an input jack that lets you plug your CD or MP3 player directly into the instrument. This enables you to play along and practice with your favorite CDs – and no one else even needs to hear a thing.

Output. Silent violins don’t have to be silent if you don’t want them to be! They have an output jack so that you can plug the violin directly into an amplifier. A silent violin, therefore, turns out to be not just a quiet practice tool but also an electric instrument that can be used at gigs.

Built-in preamp. Silent violins feature an onboard preamp that allows greater control over your sound. Several tonal options (like “reverb”) can be applied to your sound while you are listening on headphones or while you are performing with your amp! Typically you would want to plug an electric violin into a separate preamp before plugging it into an amp in order to possess the most control over the tone. But silent violins have this feature built in to the body of the instrument so you don’t have to worry about getting a separate preamp!

We have several different options of silent violins. Our most popular silent violin is the “Plug ‘n Play” (PPV24T is an outfit and PPV24TS is an outfit with an amplifier). This comes with either four or five strings and has several color options. We also carry the Yamaha silent violins (SV250 and SV200), and the NS Design series. These are similar to the Plug ‘n Play but offer a greater refinement of sound.