Learning to Jam: The O'Connor and Suzuki Methods 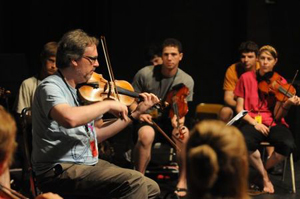 I've been thinking a lot lately about Mark O'Connor's blog articles, especially his most recent ones "The American Violin" and "Suzuki Has Gone Fiddlin'." The comments section of Mr. O'Connor's blog, especially the "Suzuki Has Gone Fiddlin'" article, show just how much disagreement there is in the American classical community on our preferred teaching methods.

Plenty of folks swear by The Suzuki Method, which was revolutionary when it took hold in the United States through John D. Kendall in the 1950s and '60s. At its core, The Suzuki Method believes that music education functions a lot like early language acquisition: if you create a vibrant musical community through teachers, recordings, concerts, and peers, then there's no reason your child can't learn to play the violin. Or, that learning the violin is as easy as learning to speak and read. (Which is still pretty hard sometimes. More picture books, Dad!)

So why do we need to change anything? Why does O'Connor want to rethink the way we teach our kids to play the violin?

While appreciative of The Suzuki Method's faith in each child's musical ability, Mr. O'Connor wants more. His O'Connor Method focuses on traditional American music like blues, folk, jazz, and spirituals; by making these genres the focus of his method, O'Connor opens the door to imrovisation and thus to individual creativity. (You simply can't learn to play jazz without learning to jam.)

That said, the more articles I read by O'Connor, and the more I examine his method books, the more I'm convinced that he wants just one thing to happen for his students: for them to find their voice. One of my favorite poets, Seamus Heaney, has written on the difference between "craft" and "technique," and I think it's relevant here if only to freshen to conversation about the Suzuki and O'Connor methods. For Heaney, discovering your "technique" is pretty much what most of us would call "finding your voice":

I think technique is different from craft. Craft is what you can learn from other verse. Craft is the skill of making … It can be deployed without reference to the feelings or the self. It knows how to keep up a capable verbal athletic display; it can be content to be vox et praeterra nihil—all voice and nothing else—but not voice as in ‘finding a voice.’ Learning the craft is learning to turn the windlass at the well of poetry. Usually you begin by dropping the bucket halfway down the shaft and winding up a taking of air. You are miming the real thing until one day the chain draws unexpectedly tight and you have dipped into waters that will continue to entice you back. You’ll have broken the skin on the pool of yourself. ("Feeling Into Words," pgs. 20-21)

Craft looks a lot like technique, but we certainly know technique when we see it. You get goosebumps when you witness technique; you feel like you're hearing something no one has ever heard before. Or, as Emily Dickinson said, you feel like the top of your head has been blown off. And when you learn technqiue, you're finding your voice, which can be as distinct as the way you walk, speak, or dance. 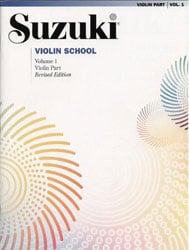 O'Connor's deep fear is that we're teaching children craft but not technique. We're teaching capable musical displays but not equipping our students with the true creative potential of technique. (It's a heavy moment in your artistic life, when you've broken the skin of yourself and you're no longer pulling up air, but it's one that is worth the wait.)

There have been plenty of counter stories, though, from Suzuki graduates about how their violin teacher included American genres and encouraged creativity. They narrate a more complex Suzuki Method, a hybrid method. On his blog, O'Connor recognizes the potential of a more hybrid Suzuki Method but worries about the lack of real commitment to creativity in this approach and the dangers of a hodgepode approach to musical education. He's put serious thought into the progression of his method and it's distressing, I think, to contemplate a buffet approach. Fair enough.

In the end, I'm not sure anyone can tell you which method is right for your child. But I do believe techique is necessary to any serious creative endeavor. If you want your child to write American music, then your child needs to find his or her American voice. That begs the question, however, if creativity and finding a voice are always what we want from art. Those things can be frightening in a way that performance isn't.