A Meditation on Beethoven’s Ninth Symphony 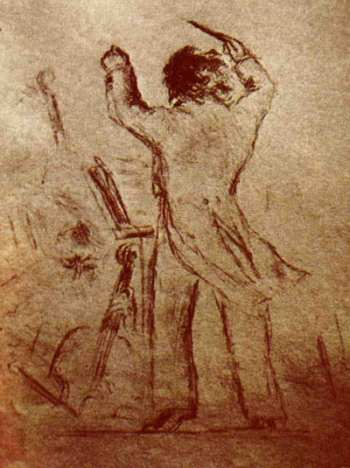 Beethoven’s Ninth Symphony is at once glorious and confusing. This choral symphony is widely considered to be a milestone masterpiece in the record of human history, yet two centuries after its composition it still continues to confound novice listeners and musicologists alike. It is broadly understood as a triumphant proclamation of humanistic fraternity and as such has been performed on landmark occasions. Most famous among these was its performance on Christmas Day in 1989, when, shortly after the demolition of the Berlin Wall, Leonard Bernstein led an orchestra comprised of musicians from around the whole world in this “Ode to Freedom.”

Nonetheless, what are we to make of the symphony? What does it mean, and is it true? Richard Taruskin, in his article Resisting the Ninth, calls the work “at once awesome and naive.” Are we to take Taruskin at his word or should we abandon all reservation in order to hope in the joy which the symphony professes?

To propose an exacting interpretation of this symphony would be both ridiculous and disrespectful. As such, I offer some of my own reflections on this masterpiece which I do not by any means intend to be all-inclusive. The center of my thoughts? Friendship.  One of the great messages that the symphony imparts to me is of friendship as a means to joy; further, it speaks of perfect friendship with all mankind as a characteristic of that consummate joy which we on earth do not yet possess.

I begin with some thoughts on Schiller’s 1785 poem, “An die Freude.” Friedrich Schiller did not consider his poem to be of lasting greatness; to his lifelong friend and patron Christian Körner he remarked that the work is “of value maybe for us two, but not for the world.” And what does the poem speak of? Joy, yes, of course, but joy conveyed especially through friendship:

Whoever has had the great fortune,

To be a friend’s friend…

Add this to our jubilation!

In fact, the poem says, the only ones who are explicitly exempt from this communion of joy are those who have never had the light of such friendship.

It is also worth being attentive to the portion of text in the Ninth that is not from Schiller’s poem. The first line of the libretto was written by Beethoven himself:

O friends, not these tones!

Rather, let us raise our voices in more pleasing

I do not consider it an accident that Beethoven precedes the ode to Joy (“Freude,” in German) with a call to humanity, to friends (“freunde”). To me, this play on words points unmistakably to one of the major themes of the symphony: joy imparted through personal communion. This is why the piece has been performed on occasions that celebrate moments of reunification – if only temporal – of the human race.

This, I think, is where Taruskin takes issue. Over the course of human history we have surely seen that no human reconciliation is lasting; no society has ever been established that has not been subjected to the scourge of war or offenses against the dignity of mankind. In light of this, I can see where one might look at the Ninth and see only the disillusioned dream of a crazed, deaf man nearing his final days. I understand -- we should strive for peace with everything we have, but it will not be accomplished by us or by our own works. The world still awaits a redemption wherein all will be made new and we all will be brothers beneath the starry canopy. The Ninth Symphony teaches up to hope for this consummation of joy. The symphony also teaches us that the friendship that we bear even now is an image and a foretaste of that perfect communion which is the hallmark of eternity.