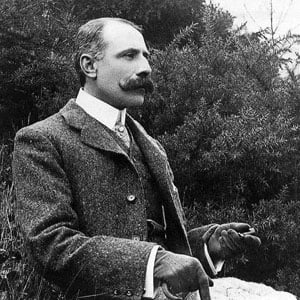 It's fitting that such an elegaic concerto is the last concerto of our letters. (Sad face!) Edward Elgar composed his cello concerto, Op. 85, in the summer of 1919; it's hard to ignore the fact that he composed the concerto in Sussex, where the previous summer he had heard the thunder of heavy artillery drifting across the English Channel from France.

War and art are such strange and perfect bedfellows. Although the poet Philip Larkin would probably take issue with the expressiveness of Elgar's concerto – he preferred understatement, probably to a fault – I can't help but think of Larkin's poem "MCMXIV," an elegy for the year 1914, the last year untouched by the horror of truly modern warfare. The last stanza of the poem reads:

I know I keep quoting poetry to talk about music, but what other kind of language can say what I hear? The concerto sounds, at times, like Larkin's valediction: "Never such innocence, / Never before or since / ... / Never such innocence again" (Of course, the whole concerto isn't so elegaic, but I couldn't help but hear these lines in the opening of the Adagio, which is mournful stuff.)

The more I listened to this concerto, the more it gnawed at me. Why do I hear such sadness in this piece, Alberta? Does the cello, with its lower range, have a voice that reaches us in a way other instruments can't? Is it just me? It's possible that it's not just me: all the commenters (yes, I read them) on YouTube seemed to be crying into their keyboards too. I guess it didn't help that we were all watching the Jacqueline du Pré performance.

It's intense stuff: Du Pré drapes her body over her cello (the 1712 Davidov Stradivarius) and her lithe and willowy bowing seems to come almost from the instrument itself, a gravity only she feels. Some players impose themselves on an instrument, it seems – they control it – and others have a conversation with it. (At times it seemed like the Stradivarius swayed before du Pré swayed.) I've never seen a musician listen so intently – to the concerto, her conducter, and the instrument – while playing so expressively. All of this is to say that maybe du Pré  is to blame.

In any case, I'm suspicious of my reaction to the Elgar concerto because it's so strong. Am I really hearing the Elgar cello concerto when I feel such heavy sadness? And am I imposing all this stuff about World War I and an instrument and composition that so deeply inspires both the performer and listener?

If it's all projection and sentimentality, tell me why I feel a gravitas that's not my own.