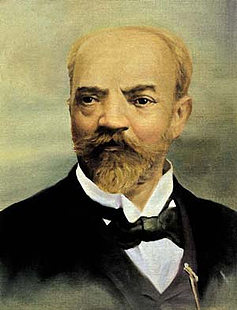 I’m no music scholar, historian, or expert in Dvorak’s music. If music scholars say that there isn’t anything distinctly “American” about Quartet No. 12, then I must defer. However, you and I (and probably the majority of listeners, as well) are in agreement that the quartet does SOUND American. So, why is that?

On one hand, we really can believe that the quartet was influenced by American folk songs, spirituals, etc. since Dvorak said that it was. Just because we don’t know exactly what he drew from doesn’t mean that there wasn’t something there.

But, besides this, the Quartet sounds “American” largely because it is extremely pentatonic. The traditional major and minor scale systems are built around tension and resolution (so interestingly enough, even the Western scalar models incorporate the idea of “home” and “exile” that you brought up). The major and minor scales each consist of seven notes. The major scale is built of do, re, mi, fa, sol, la, ti, (do):

Do is the “home” note, and re and ti, being the closest in proximity to do, thereby carry the most tension. They long to be resolved.

Since ti, the major scale degree with the most tension, is omitted from this scale, the pentatonic scale does not have nearly as much tension as the traditional major scale does. The pentatonic scale has long been used in folk songs in many countries. Further, its lack of tension is often evocative of broad, sweeping vistas. It could be used to describe a new horizon, a new frontier full of hope. In these ways, Dvorak uses the pentatonic scale to great effect in his quartet in order to portray the American spirit from the late 19th century.

But you’re right – ultimately it doesn’t matter. The form and inspiration of the piece are subservient to its expression. You’re also right in not trying to hear a story in the Quartet. Overtly programmatic music (like Symphonie Fanastique, for example) WILL try to tell a story, but for the most part, the traditional classical forms are not composed along the lines of a narrative. I always find myself marveling that so many pieces with such a tremendous range of expression all draw so much from the basic idea of tension and resolution.

And so, to address your final point: does music create an illusion of home? You are right in seeing the cycle of exile and return, but ultimately I have to ask whether music creates an illusion of home or whether it simply describes it. To this end, I will close by referencing the Largo from Dvorak’s New World Symphony, which was also inspired by his visit to Spillville and is largely pentatonic. I believe that this movement answers your question, because it is closely linked with a spiritual called “Goin’ Home.”