Dvorak's String Quartet No. 12: Is There Anything American About It?

In this week's letter to the violinist Alberta Barnes, I try to figure out what's so American about Dvořák's String Quartet No. 12. 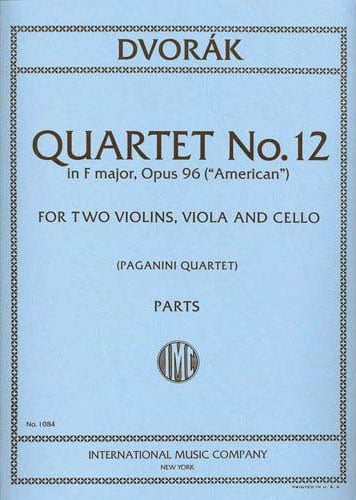 I can't tell you how many times I've heard professors, musicians, writers, businessmen, and baristas, friends from all walks of life, quote the North Carolina native and Chapel Hill alumnus Thomas Wolfe: "You can't go home again." Wolfe brought that phrase into common usage, but in North Carolina it's fair to say that the phrase was legion. And, always appended to it, was an emphatic correction: "No. You can."

After years of annoyance, I'm starting to believe all those North Carolinians were right, sort of. They weren't necessarily right themselves, but they were right that Tom Wolfe was wrong. It's not that we can go home again; it's that we've never been there.

Let me explain. Listening to Dvořák's String Quartet No. 12, I fell into the same trap other listeners have often fallen into: "Isn't it amazing how Dvořák draws on folk music and spirituals? Doesn't this sound like such an American composition?" I thought I could hear American music in this one; not only that, I wanted to hear a national music in the String Quartet because Dvořák wrote it in Spillville, Iowa. If that's not enough, Dvořák included this gem in an 1898 letter, "As for my new Symphony, the F major String Quartet and the Quintet (composed here in Spillville) – I should never have written these works 'just so' if I hadn't seen America."

Most music scholars, however, say that there's nothing distinctly American about the Quartet. It certainly influenced the American music that came after it, but it's difficult to pinpoint exactly how this piece borrows from the American songbook of the late 19th century. The Quartet apparently borrows more from Dvořák's previous compositions than it does from folk music and spirituals. Go figure.

In a way, it doesn't matter. I fell in love with the way the cello and two violins mirror each other in the Quartet, the way the main theme of the piece shifts from one instrument to the next and momentarily hovers above itself. I tried to think of the Quartet as story about Dvořák in America, but I couldn't even find a narrative. What I'm seeing is that the structure of classical music starts with a still point in time and then unfolds through associational logic, distance from and occassional return to its beginning. Music isn't a story at all. It's exile.

It seems so fitting, then, that there's nothing American about the Quartet except what I imagined. It makes me think: Does music create an illusion of home and then try to return to it? Is that what the exposition and development and return all mean – we imagine home and then try to get back?