The Glory of Saint-Saëns' "Organ" Symphony 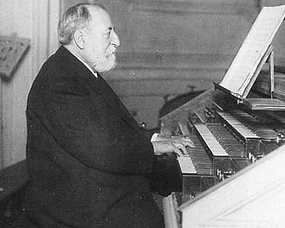 I am pleased to hear that you enjoyed Saint-Saëns’ “Organ” Symphony and that you were also overwhelmed by its expressive force. Good! This late Romantic symphony has done its job. I chose this as the first symphony for us to discuss because it is so engaging and powerful – in many ways I see it as a good introductory piece for the novice classical music listener.

First of all, you mentioned the heightened emotionalism of the symphony. Yes, this is definitely characteristic of the Romantic era of music; this movement swept through literature, art, and music, so since you a writer you are surely familiar with the ideas behind it. In music, romanticism displays itself through increased dissonance, richer harmony, broader scope, and some manipulation of the classical forms.  I am partial to E.T.A. Hoffmann’s discussion of the difference between the “beautiful” and the “sublime.”  The “sublime” necessarily encompasses a degree of suffering and pain and thereby leads to a higher good than the “beautiful.” In this sense, the Romantic idea of the “sublime” essentially encompasses what it means to be human. The joy, the sorrow, the pain, and the ultimate glory of humanity are expressed through the expansion of classical forms. Therefore, I am not at all surprised that this 40-minute symphony seemed to contain your whole life.

That being said, this symphony does not contain nearly as much emotional excess as do many other symphonic works of this era. Milton Cross even praised this symphony for its “crystalline beauty whose surface is not disturbed by passion.” The power of the piece lies not so much in its Romantic emotionalism but more in the unprecedented fusion of the symphony and the organ. Up to this time, the symphony and the organ had remained in their separate spheres of the secular and the sacred. Their union in this piece is a tribute to the great pianist Franz Liszt, to whom Saint-Saëns dedicated the symphony after learning of his death. The result is a powerful sonority whose glory is not fully unveiled until the Finale of the work, when the organ’s forte entrance spans four octaves in C major. Maestoso indeed! The very stage shakes from the sonority.

In tribute to Franz Liszt, then, the virtuoso pianist who spent the last years of his life living in a monastery outside of Rome, Saint-Saëns has quietly realized something which Liszt had written about in his twenties:

“The creation of a new music is imminent; essentially religious, strong, and effective, this music… which we will call humanitarian, will embrace within its colossal dimensions both the THEATER and the CHURCH. It will be both dramatic and sacred, splendid and simple, pathetic and solemn, fiery and unruly, tempestuous and calm, serene and tender.”[1]

This seems to express a little of what you mentioned, does it not?