Why You Should Listen to Music

Today's post from Nerissa Nields compares exposure to music to exposure to language: for her, and for Suzuki teachers, musical fluency happens for any child with enough practice and exposure. Nerissa, however, also brings up a bigger and more troubling question: What is the difference between giving your child the gift of musical fluency and raising her to be a prodigy? And is the latter even something we would wish on our children? As always, Nerissa tackles the topic with grace, humor, and insight.

I had the good fortune to attend a Suzuki parent talk by my old friend fellow guitar teacher Dave Madsen. Dave and I knew each other 20 years ago when we were both working at the Loomis Chaffee school in Windsor CT, where our band The Nields got its start. Dave is a father of two, and though he was a professional guitar player and “regular” teacher, it was through his exposure to his daughter’s Suzuki violin lessons that he got interested in the method, and eventually trained. He is now the foremost local Suzuki Guitar trainer and teacher; he teaches at the University Of Hartford.

There is much to recommend the Suzuki method, but what I want to write about today is its foremost innovation, which is to understand music as a language and to therefore teach it to children in the same way we “teach” them how to speak and later to read.

I had a complex reaction to this shot, by the way. On the one hand, this makes a lot of sense to me. In HooteNanny we ask parents to play the CD of the class curriculum (22 or so songs sung by Katryna and me) every day, even if it’s just background music. In my own experience, nothing has been as helpful as relying on my own ear-memory of how a song goes in order to play it back. And the metaphor extends: when I want to compose a song, I usually prepare my mind by exposing it to a variety of music, stimulating my muse in this way. 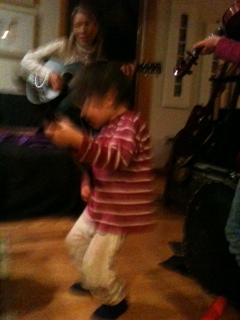 But on other hand, I thought, give the kid a break! He’s trying to ride his bike! Does he really need that gigantic machine strapped to his back? This might make sense if my goal is to make my child a virtuoso. But I don’t want her to be a virtuoso! I know the life of professional musician, and no matter how successful one is, it’s a hard one. Would I wish that on my child? Maybe. That’s for another post. But gaining musical fluency is a totally different goal from becoming the toppermost of the poppermost, to steal a Beatlism. Watching that three-year-old pedal around with the tape recorder strapped to his back, it was hard for me to see that in any other light than that his parents wanted to make him a star. But maybe I’m wrong. Maybe they just wanted to make him fluent.

In any case, I raised my hand at this point in the lecture and said, “Can I mix up my Suzuki Book One CD with some Beatles? Because my kids really love the Beatles and sometimes complain when I put on Suzuki. Will that corrupt the process?” And to my relief, Dave laughed and said, “No way! Bring on the Beatles!”

I should say that though we have not strapped an iPod to our children, we have been extremely diligent about playing the Suzuki CDs (Book 1 and Book 2) on a daily basis. Both my 5-year-old (the violinist) and the 3-year-old (the air guitarist and self proclaimed Suzuki drummer) hum, la la and whistle the tunes of all the melodies all the day long. My son, in addition, runs into the music room when the CD is playing to drum the rhythms of the tunes. But we also listen to a lot of Beatles. These days, it’s late era Beatles: Let It Be, Abbey Road, The White Album, with some psychedelic Sgt. Pepper and Magical Mystery Tour thrown in. (“Day Tripper” is also a huge hit, as is “Baby You Can Drive My Car” though Johnny likes to caution the listener, “A baby should NOT dwive the car!”) Lila has been learning the riff to “Hey Bulldog” on her violin (loving that low 1 on the E string) and whistles the solo to “Day Tripper.”

I look at my sister’s kids who are 10 and 7. They are not Suzuki kids, but they certainly are musically fluent. Amelia currently plays piano, guitar, bass guitar, violin and clarinet. She can pick up pretty much any instrument and play a scale. She writes her own songs, composes and sings. William can play leads on his electric guitar. They have a second language, and they learned it through good early music education (Music Together and HooteNanny), private lessons (with various area teachers including Maggie, and their parents) and what I have observed to be a constant stream of music playing in their home. They pull notes out of the air just as my kids do.

Is it useful to have a second language? Maybe. It depends what that second language is. Is it fun? Definitely. Does it expand one’s world view, one’s capacity to understand? Undoubtedly. I tend to have a take-no-prisoners attitude when it comes to... really anything in life, so I err on the side of playing the darn CD too much, though I balk at harnessing the kid with an iPod with earbuds. But chances are at any given time if you come near my house, you will hear strands of late Baroque violin music mixed in with classical guitar versions of “Lightly Row,” and “While My Guitar Gently Weeps.” Stay to listen.