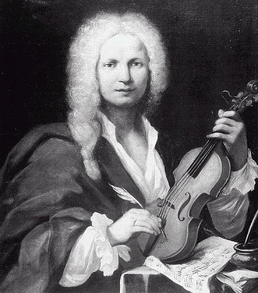 It is so sunny and warm in Ann Arbor right now (over 80° this week!) that the topic of spring remains on my mind. I personally see connections between the Tchaik serenade and elements of spring, as mentioned previously, but what about a more explicitly programmatic springtime piece?

It might be time to take a look at Vivaldi’s “Spring” concerto from The Four Seasons. We can’t get much more explicit than this, especially for a Baroque piece.

The Four Seasons are four violin concerti that were part of a set of twelve concerti entitled The Contest between Harmony and Invention. In this set Vivaldi sets forth to demonstrate the difference between the prevailing manner of composition of the time and a more innovative, imaginative form of composition. The Four Seasons fall into the latter category. The piece is almost explicitly programmatic; sonnets are included in the published manuscript line by line with their corresponding musical phrases. The author of these sonnets is unverified, but it is widely assumed to be Vivaldi himself.

Have you read the poetry? Check it out:

Allegro
Springtime is upon us.
The birds celebrate her return with festive song,
and murmuring streams are softly caressed by the breezes.
Thunderstorms, those heralds of Spring, roar, casting their dark mantle over heaven,
Then they die away to silence, and the birds take up their charming songs once more.

Largo
On the flower-strewn meadow, with leafy branches rustling overhead, the goat-herd sleeps, his faithful dog beside him.

Allegro
Led by the festive sound of rustic bagpipes, nymphs and shepherds lightly dance beneath the brilliant canopy of spring.

(Obviously, the original poems were written in Italian, so the sonnet form has disappeared in the English translation.)

The concerto, admittedly, is a bit overplayed. Correspondingly, many violinists view the piece as an inane “pop-classical” work. But, if we look past the ubiquity of the concerto in commercials, movie soundtracks, and Italian restaurants (cough!), we have to admit that The Four Seasons are actually very innovative. “Program music” didn’t really explode onto the scene until the Romantic era and so we have to appreciate how explicitly programmatic these concerti really are. Observe, for example, the barking dog motive in the viola part of the Largo from “Spring.” Or the chirping birds in the opening Allegro. Besides, even though many joke about Vivaldi writing the same violin concerto 200 times, we have to give the composer homage for having solidified the standard three movement concerto form nearly singlehandedly.

Ultimately, the Four Seasons are quite pleasant and unmistakably popular. The poetry may not be the most profound set of sonnets ever composed, but there is an innocent simplicity about them. I always enjoy reading the poetic phrases as I play through the piece, and, even though it isn’t quite July yet, I always laugh when I get to the slow movement of “Summer”:

Adagio e piano - Presto e forte
His limbs are now awakened from their repose by fear of lightning's flash and thunder's roar, as gnats and flies buzz furiously around.