For Violinists, How Young Is Too Young to Go Pro?

Thanks to Nerisssa Nields for another thoughtful blog post about the adventures of being a Suzuki Mom. In today's post, Nerissa describes how her daughter Lila busked – without realizing it was illegal! – in the Charlotte Airport. In recounting the story, Nerissa grapples with the complications that face the young, ambitious violinist. In her words, "when, if, and how" do we decide to earn a living from "the gift" of our talent?

Last week, our family flew to Florida to visit the grandparents, get a respite from New England winter (which has been in short supply), and of course, fly on airplanes. For children aged 3-5, the journey really is the destination, or at least a strong competitor. Every bit of the trip is exciting: the drive to the airport; the airplanes flying low overhead, the trek to the ticket counter and through security (my kids give each other and us high fives when they get through).

Of course, we brought the violin for Lila, and to compensate for not bringing his guitar, we brought a tambourine and mallet for Johnny. On our way down, we had to stop for a two hour layover in Charlotte. I quickly calculated and realized we would miss practice unless we grabbed this two hour opportunity.

“Hey!” I said. “Let’s open your case, Lila, and see if you make any money.” I should mention that the first violin Lila ever saw in person was held by a busker on Main Street in Northampton. So she knew immediately what I meant.

We made ourselves a little camp in between seats at our gate. Then Lila got out her violin and I set out the case in front of her, and myself as audience a few feet away, my back to the river of people racing to catch their planes. Tom put in a dollar lest there be any doubt as to the purpose of the open case.

I suggested pieces. Lila played them, her eyes scanning the passers by. At first, no one stopped. I could tell she was getting discouraged, and my heart broke for her. I know how awful it is to put yourself out there and be ignored. We played many a frustrating busking gig when we were first starting out, though in each instance we learned something. But Lila is five. I was twenty. 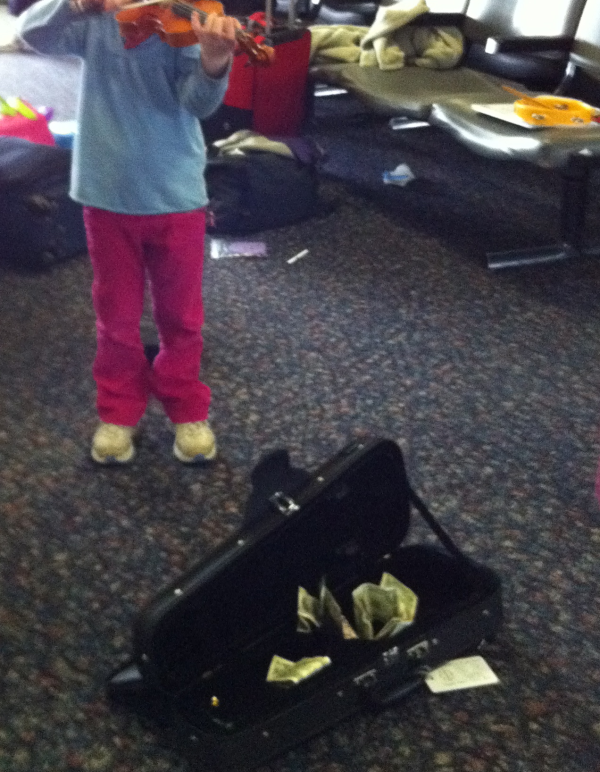 But just at the end of Minuet 3, someone tossed a dollar over my shoulder into the case. Lila’s face lit up. People were racing by to catch their planes, but some lingered, listening to the five year old playing Handel and Bach. They clapped, exclaimed, and tossed their bills into the case. And I had an intense mixture of pride and…something else, not so great. Guilt? Shame? I wasn’t sure which. But after a guy gave her a five dollar bill and said, “Can I take your picture? You’re going to be famous!” I got it.

She was beaming. We noted that she can now call herself a professional musician. We’ve just read The Trumpet of the Swan, one of my favorite books ever, by E.B. White (Charlotte’s Web, Stuart Little). In it, a mute trumpeter swan learns to communicate through a trumpet stolen by his father. He becomes a famous and beloved professional trumpet player, earning money through his playing to pay back the store from where his father stole the instrument of his salvation. So Lila knows about playing for money. And she knows about performing, watching her mother and aunt. It’s the family business. And it’s the way we give back to the world. Ultimately, that’s what musicians do: we take the gift we’ve been given and give it back. Some of us feel like we are strangling if we go too long without that interchange.

“You know, that’s illegal,” Katryna said when I called her to tell her about our adventures. So that settled my internal dilemma. We won’t be busking in airports again. I will protect my little girl for a few more years anyway from the power of her own talent, the pull everyone has for external validation (through money and attention), and from her own stage mother (there’s definitely a Mama Rose in me, no denying it). And when the time is right, I’ll let her come to her own conclusions about when, if  and how to give her gift.