How a Three-Year-Old Has a Suzuki Guitar Lesson

Nerissa Nields, one of our regular contributors, writes about Suzuki guitar lessons with her son Johnny. Nerissa describes how Johnny, initially uninterested in guitar lessons, comes around to them and even says that he "wuvs" them. Nerissa's thoughtful entry shows just how impulsive and lovely kids can be, though it also expresses faith in music's hold on us, whether we're three-and-a-half-years-old or parents ourselves. 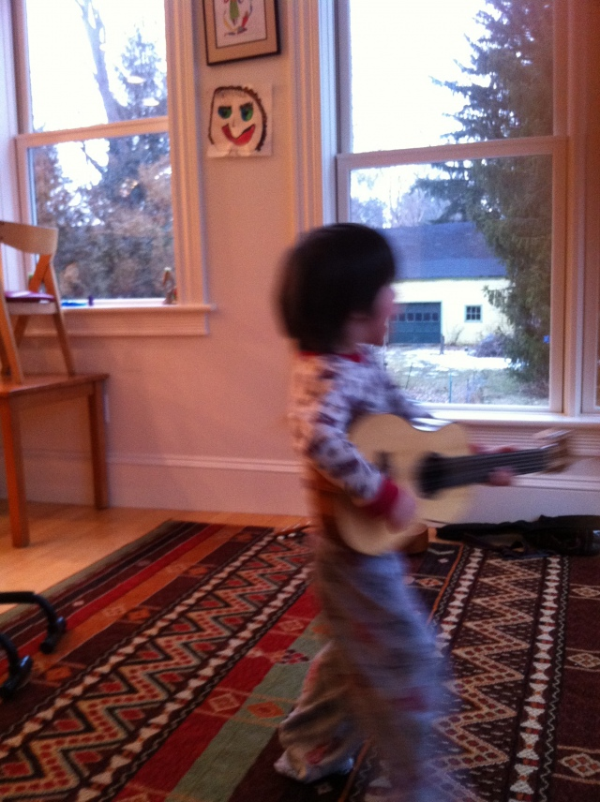 So we started Johnny on Suzuki guitar lessons. Yes, he is three-and-a-half. No, he can’t understand the difference between my gently suggesting that he might not want to dump his glass of watercolor paint wash all over the table and cruel and unusual punishment. (At the top of his lungs: “Mama, you are being SO mean to me!”) Yes, I am probably crazy.

But he is so cute carrying that guitar case around. Also, his teacher, Jeremy Milligan, is terrific. We arrived at Northampton Community Music School last Friday just as the sun was setting. My little boy had gone from complete refusal to participate in lessons – unless Jeremy suddenly decided to teach him drumming – to complete accordance. Why the change? Because the week before, I canceled our “playdate” with Jeremy on account of Johnny’s head cold. As soon as he learned wasn’t going to have a guitar lesson, he desperately wanted one. All of a sudden, he was pointing out to me all the songs in which John Lennon was playing acoustic guitar.

That being said, when we paid a visit to Downtown Sounds, our excellent local music store to purchase a tiny drum stool (for our aspiring classical guitarist to sit upon) and a fully grown guitar footstool (of which I have one, somewhere, mouldering in my attic. Grrrr. $23.95 later…), Johnny was like the proverbial kid in a candy store. “Oh, Mama, wook! An ewectwic guitar just for me!” He was pointing to an electric ukulele, which I must say would make a fabulous addition to our home. And I was glad to point out to him the Gretch hanging from the ceiling similar to the one George played and right next to it the Rickenbacker John played. High pitched yelps and shrieks filled the store, and the salesmen were completely charmed and charming to us. But when Johnny noticed a full drum kit in the window, “Just wike Wingo’s!” and then noticed we weren’t leaving with it, he shouted so loudly at me on the way down the street back to the car that his father, who works nearby, heard him screaming at me. “MAMA! I. NEED. DAT. DWUM. KIT!”

The lesson involved Johnny listening to Jeremy who said, “When I say a number, clap the number. If you clap the right number, you get a monkey.” And Jeremy would say, “Three.” Johnny, a tiny mischievous smile  curling his mouth, clapped carefully three times. Jeremy hung a Barrel of Monkeys red monkey on the edge of the music stand until there was a long chain of them.  Then Johnny got rewarded for his attentive listening by putting a little plastic checker into a yellow box. 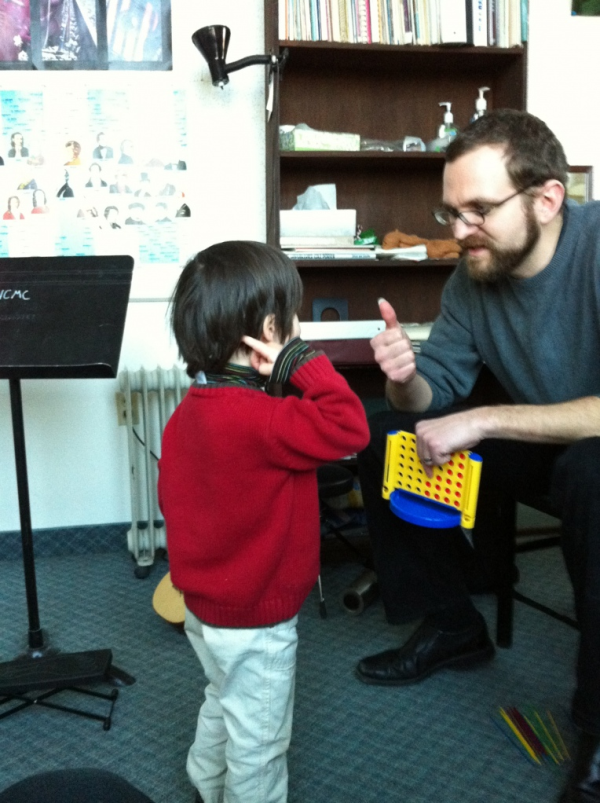 Johnny noticed a small drawing of Franz Schubert on a big poster full of composers and staffs and instruments and notes. “Mama! Dere’s John Lennon!” He further observed that Stravinsky looked like the grandfather in A Hard Day’s Night. Then we picked up his little guitar case, untouched during the lesson, and went downstairs to sign up for three more lessons. On the way out the door, Johnny sighed and said, “I wuv dis pwayce.”

We’ll see if we continue. Lessons are $31 per half hour, and it’s a steep price to have someone play counting games with my three-year-old while I sit on the edge of my seat hoping secretly that the teacher will notice how unusually gifted my child is. Johnny came home and immediately dragged out all of our drums, set them up around his new drum (guitar) stool and asked us to put on “Sergent Pepper’s Wonewy.” Over the weekend, Ringo arrived. We had family music night on Sunday. Tom played harmonica to Gossec’s “Gavotte” and we all sang “Eight Days a Week.” And word is Johnny’s going to have company soon. My friend Debra was driving her three-year-old son to school, listening to the Beatles, and she told him Johnny loved the Beatles and was learning guitar. She asked her son if he wanted to try, and he asked if he and Johnny could be a band. ”Maybe,” my friend said, “when you guys are a bit older.” 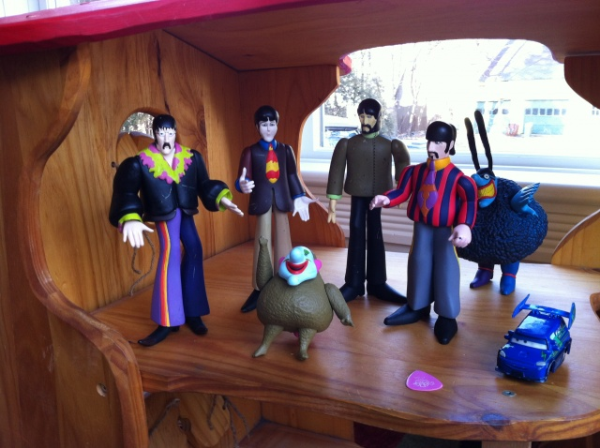