I sat down with SHAR Violin Shop Manager Hans Anderson on Friday, November 4th to talk about SHAR's new John Cheng line of violins. Hans and I met early that morning in one of the rehearsal rooms, which, with its hardwood floors and vaguely Victorian furnishings, seemed like a fitting place to talk about a new line of violins. Before talking about the John Cheng line, though, I first asked Hans to share a little about himself as a musician and his approach to selling instruments. I found our discussion so interesting that I decided to post the interview in two parts on our blog. In last week's post, Hans shared his thoughts about the relationship a player forms with an instrument. In this week's post, Hans and I talk about SHAR's new line of John Cheng violins and the range of responsiveness these violins open up for serious musicians on a budget. 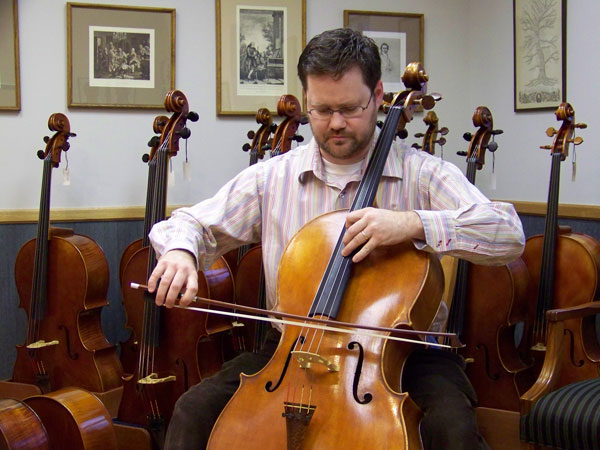 Joseph Chapman: I wanted to shift gears just a little bit to talk some about the John Cheng line of violins that SHAR recently introduced. For you, what’s special about these violins?

Hans Anderson: I’ve been here for about fifteen years, so I’ve seen a lot of violins. These instruments are remarkable because they are able to do so many things musically. There’s a great variety of tone color and dynamics, and they’re also able to do some great things technically. For the very advanced repertoire, violinists push the instrument. By the very nature of the instrument and the violin repertoire, there’s a certain boldness and singing quality that you have to have in a violin. It’s easy to make a violin, but it’s very hard to make a violin sound great. And it’s really hard to make it sound great within a reasonable price range. But I think that’s the really intriguing thing about these violins: they can do things that a lot of professional players demand, but they’re within the price range of younger students and lifelong enthusiasts. Again, this is something that wasn’t available fifteen years ago—it wasn’t even available ten years ago. It’s only recently that we’ve been able to find instruments of this caliber in this price range. 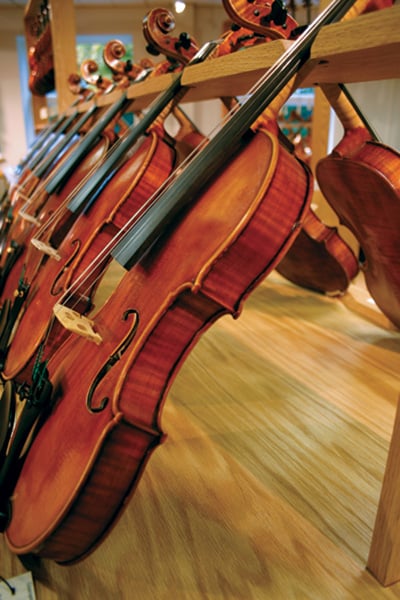 JC: Some folks have been a little nervous about buying high end instruments manufactured in China. Is it fair to say that things have changed? Is the manufacturing country really an indicator of quality these days?

HA: Well, I think here have been violin makers in China for close to a hundred years now. The concern ten or twenty years ago was that the wood selection was not so good—some Chinese makers did not properly age their wood. They were using very green wood and did not properly dry it out. In the fifties, sixties, seventies, and eighties, the reputation of the Chinese violin was a sign of something very cheap, and it would crack because the wood was not aged. But I think, just like in any country—it really doesn’t matter where you’re from—there are going to be people who love violin making and want to do it to the best of their ability. Starting from the 1950s on, there were a few violin makers from China who went to study in Italy. They went to study in England, they studied in France, and they studied in America. They got the same training that every other maker at the professional level got. These are the people who took it back to China and ended up understanding the great traditions and techniques of European violin-making. It’s a slow process: aging the wood five to ten years at a minimum, and then there’s the whole process of making the instrument itself. You really can’t take shortcuts. These are the types of violin makers who are always interested in quality first. And these makers—maybe because China is such a big country—were hard to find right away. I think it took SHAR many, many years of building relationships until we were able to meet the best violin makers. Those relationships, I think, have been cultivated, and we’ve been able to ensure that from a pure, technical craftsmanship standpoint that these instruments are made at a high level. I’ve shown them to other European and American makers, and they’ve been impressed. From that standpoint, I’m totally excited to represent the John Cheng line of violins.

HA: This is a tough question. The best way that I can answer it is that any one of these John Cheng violins is great for somebody who really loves playing, whether you’re a professional or a young student, or, like me, someone who is close to forty years old and plays the occasional gig mostly for fun. If you really love playing and want something that’s dynamic and responsive and flexible, you’re going to be able to do a lot with these instruments. I can’t tell you that it’s just the ten-year old virtuoso that’s going to benefit. We’ve had players from all different levels. The one common thing is that these are people that take music very seriously—they have fun—but they’re really passionate about it. That, to me, is the common denominator.