It seems like our culture has gone from an obsession with quick meals and TV dinners to a fascination with and respect for farm-to-table preparation. All of which is to say: being a foodie is no longer a fringe obsession, it's totally mainstream! And so today's guest blog asks the burning question of our time: Were any of our favorite composers also foodies?

If music be the food of love, play on,
Give me excess of it; that surfeiting,
The appetite may sicken, and so die.
-- William Shakespeare, TWELFTH NIGHT 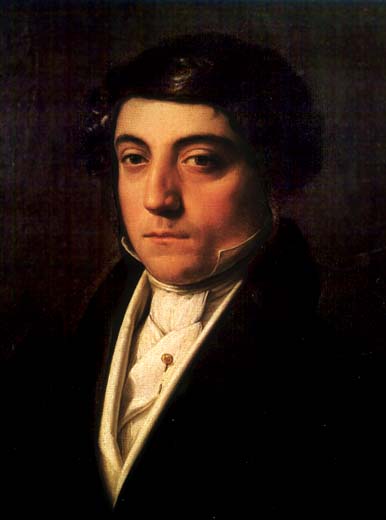 Did you know that Gioachino Rossini was just as recognized for his culinary talent as his musical talent? Did you know that Erik Satie only ate foods that were white, or that Niccolo Paganini’s amazing technical ability may have came from the fact that his father withheld food from him? Or that Johann Sebastian Bach wrote a coffee cantata? Food plays an important role in everyone’s life, but we don’t often think about the relationship between food and the musicians it nourished. Some composers even wrote music about food while others wrote their own recipes. Maybe all we really need to do to become better musicians is to eat like the greats. Probably not, but it’s food for thought nonetheless!

By the time Gioachino Rossini had reached his forties, he was able to retire. Eventually, he settled just outside of Paris where he had many dinner parties and dedicated himself to becoming a gourmet cook. I can’t explain his love of food better than the man himself:

I know of no more admirable occupation than eating, that is really eating. Appetite is for the stomach what love is for the heart. The stomach is the conductor, who rules the grand orchestra of our passions, and rouses it to action. The bassoon or the piccolo, grumbling its discontent or shrilling its longing, personify the empty stomach for me. The stomach, replete, on the other hand, is the triangle of enjoyment or the kettledrum of joy. As for love, I regard her as the prima donna par excellence, the goddess who sings cavatinas to the brain, intoxicates the ear, and delights the heart. Eating, loving, singing and digesting are, in truth, the four acts of the comic opera known as life, and they pass like the bubbles of a bottle of champagne. Whoever lets them break without having enjoyed them is a complete fool.

Rossini even has a dish named after him: Tournedos Rossini. It’s essentially beef filets with fried crouton meat glaze, on a slice of foie gras with truffles and demi-glace of truffle essence. It was created by a famous chef, Marie-Antoine Carême, with Rossini's supervision. He was a serious foodie and this dish is no exception.

Not every musician is a meat-and-potatoes type, though. A few notable composers were vegetarians, like Richard Wagner and Gustav Mahler. Wagner published an essay about vegetarianism in 1880, which apparently inspired Mahler to do the same. Mahler reportedly was mocked by some musicians in a restaurant when he refused meat, instead asking for spinach and apples. Nonetheless, Mahler seemed to be quite excited about being vegetarian (and sounds a lot like Leo Tolstoy in his ardor for the vegetarian diet):

The moral effect of this way of life, with its voluntary castigation of the body, is
enormous. I expect nothing less than the regeneration of mankind. I advise you to eat suitable food (compost-grown, stone-ground, wholemeal bread) and you will soon see the fruit of your endeavors.

Mahler’s views are trendy and popular now, but he said this over 100 years ago! At any rate, one of Mahler’s favorite foods was a dish that his sister Justine would make for him: Marillenknoedel, a traditional Viennese dish of apricot dumplings . 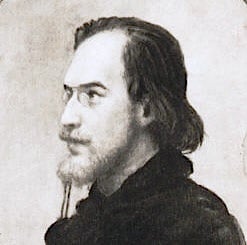 If you don’t know much about Erik Satie, there is one word that describes him well: eccentric (and that’s putting it nicely!). Among the many, many strange things about Satie was his diet. He wrote letters to himself quite frequently, and in some of these letters he described his diet which was comprised of foods that were mostly white in color: eggs, sugar, shredded bones, animal fat, veal, salt, coconuts, rice, pasta, turnips, chicken cooked in white water, white cheese, cotton salad, and certain kinds of fish. One has to ask: Why not black foods, or blue foods, or green eggs and ham?

Niccolo Paganini was perhaps the greatest violinist the world has ever seen. His father Antonio was determined to make him extraordinary. So much so that he expected little Niccolo to practice from morning till night everyday. If he stopped practicing, his father would withhold food. Talk about “practice only on the days you eat”! That takes Dr. Suzuki’s famous quote to a whole new level (let it be said, though, that we are not recommending Paganini senior’s parenting!). As a result of Paganini’s difficulty with food as a youngster, he was reported to have absolutely no reservations when it came to eating any and all sinful foods as an adult.

Ludwig van Beethoven was a well-known genius, but you may not have known what an interesting person he was. His true colors became apparent when he was once dining out, he got so angry that he dumped a plate of veal and gravy on a waiter’s head. He really liked fish, scrambled eggs in bread soup, and macaroni and cheese (with Parmesan, of course, to be fancy). He had a fondness for strong coffee; he was quite particular in that he always had to have exactly 60 coffee beans per cup. Do you think he was hopped up on this strong coffee when he decided to write the last movement of Op. 59 #3? Anytime I’ve attempted it, it sure seemed that way to me… it is definitely allegro molto!!

Giuseppe Verdi (or, to translate his name into English, Joe Green) was not only a master opera composer but a successful farmer. His parents and grandparents were restaurant owners and grocers, so food was obviously very important to the family. After accumulating quite a bit of wealth from his success as an opera composer, Verdi purchased a large farm at Sant’agata and took great pride in tending to his crops. You might even say he had a “green thumb” (pun intended!). Here’s a quote from Verdi himself: “Now that I’m not manufacturing any more notes, I’m planting cabbages and beans.” 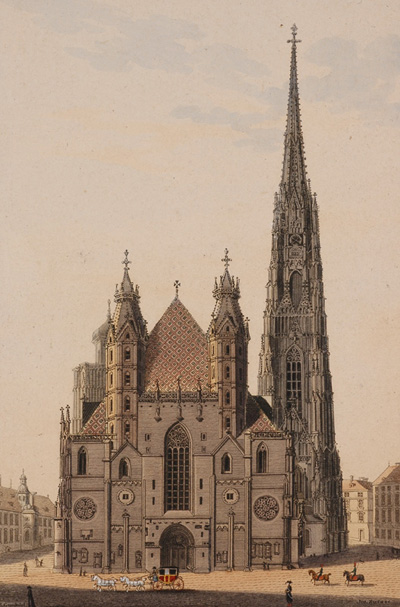 As a youngster, Franz Joseph Haydn sang in the choir at St. Stephen’s cathedral in Vienna. The choirmaster at the time, George Reutter, is reported to have taught Haydn how to trill by bribing him with cherries. Haydn later remarked that he couldn’t help but think about the taste of cherries whenever he heard a trill! (At least he didn’t develop the habit of uncontrollably salivating when asked to trill.) In the late 1780s, Haydn left Vienna to go to Hungary for employment. He apparently did not care for Hungarian food much because he lost about 20 lbs. and complained about the quality of the food in a letter to a friend of his:

Alas! Alas!, thought I to myself, when forced to eat at the tavern a slice of a fifty-year-old cow instead of your admirable beef, an old mutton with turnips instead of a ragout with little forcemeat balls, a tough grill instead of a Bohemian pheasant, Hungarian salad instead of good juicy oranges, and dry apple fritters instead of pastry.

Shame on Haydn for not liking Hungarian food! This Hungarian author firmly believes that Haydn would love Hungarian food, if he had only the opportunity to eat my Hungarian grandma’s cooking… alas!

For all you violinists out there, let’s try a little experiment. If our suspicion (hypothesis?) is that all we really need to do to become better musicians is to eat like the greats, then you all should test it out by cooking some recipes from some of the world’s greatest violinists and see what happens! Here in Ann Arbor, we have a fantastic organization called the University Musical Society. A few years ago they published an inventive cookbook full of great recipes from different musicians, hilarious stories, and musical anecdotes. I’m going to leave you here with a few recipes by Isaac Stern, Joshua Bell, and Arnold Steinhardt. Happy cooking! And more importantly, happy eating!!! 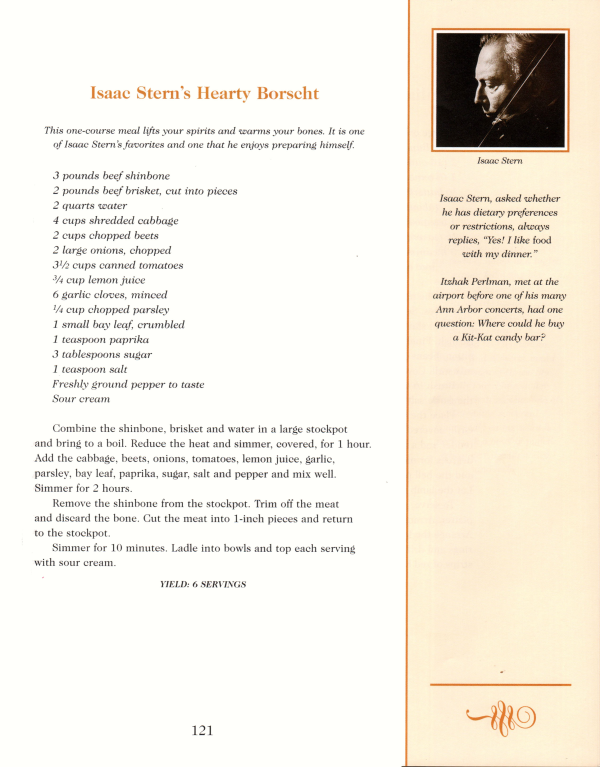 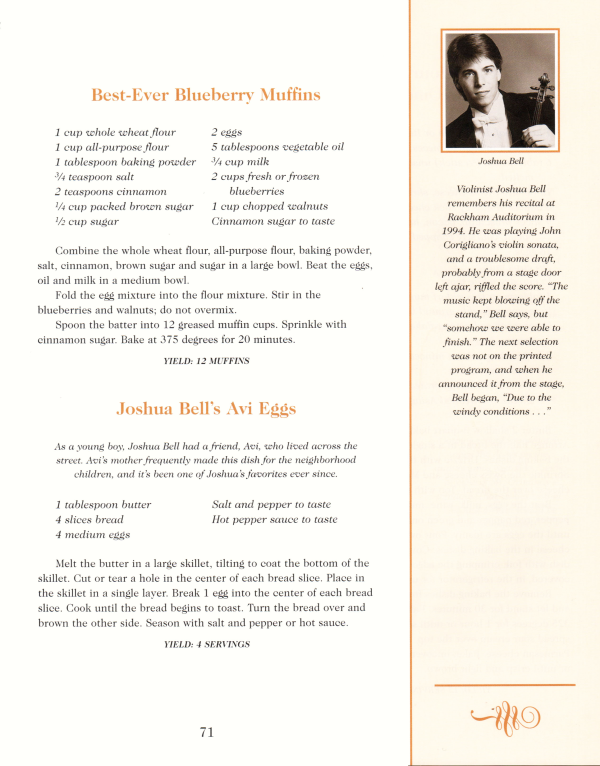