What do Shostakovich and Teenagers Have in Common?

Why am I asking what teenagers and Shostakovich have in common? Because it seems like every nerdy young string player I know (myself included) seems to go through a serious obsession with Shostakovich. There’s something so attractive about his sarcastic, rebellious overtones, and what teen doesn’t love to be sarcastic? Not to mention the many raw emotions conveyed in his music. Maybe this attraction to Shostakovich and his music is merely a teenage phase, or maybe it’s a burgeoning discovery of a serious love of his music. We’re going to try to break it down and find out.

First, it seems obvious that the thing most American teens and Shostakovich have in common is a love of loud rockin’ music. Today’s teens might be listening to Pharrell or Kanye, or putting Radiohead or Fuel on their favorite Spotify playlist. Although he was not one of their contemporaries, Shostakovich adored his rock rhythms and energetic melodies. His rock music tendencies can be witnessed in his cello concerto, the 2nd movement of String Quartet #8, the last movement of his 5th symphony, and (my personal favorite) the 2nd movement of his 10th symphony. But honestly, these tendencies can be found everywhere in his music. You might assume the most popular rockstar of the '60s and '70s was Jimi Hendrix, or maybe the Beatles… Nope! For me, Shostakovich will remain the ultimate rockstar! His music sounds like classical music and heavy metal had a baby. It can even shock older folks, the way that actual heavy metal can.

Okay, so teens and Shostakovich both love loud, crazy, rock music. But what about Shostakovich’s other works, the ones with more depth and introspection, such as the slow movements of the Violin Concerto or the 5th Symphony? Shostakovich is not one-dimensional; he was a complex guy with a lot of feelings. So many, many feelings. He often didn’t want to admit all of them to the world, so he put all of his emotional expression in his music. Does this sound like any teens that you know? He even had a signature motif, DSCH, which is a musical cryptogram that he used to represent himself in his music (my best friend, who was obsessed with Shostakovich for a while, used “DSCH” in his email address). It's the musical equivalent of a Twitter handle. 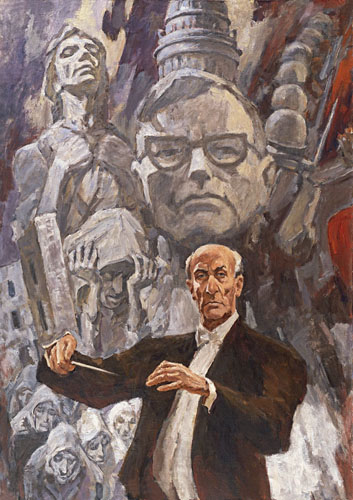 Shostakovich’s Russia was a very difficult and trying country. In 1936, Shostakovich fell out of favor with the government after Stalin wasn’t pleased with things he saw in Shostakovich’s opera Lady Macbeth. Stalin’s camp then publicly condemned Shostakovich and his opera. Shostakovich then proceeded to witness quite a few friends and relatives get imprisoned or even killed. It can be argued that a lot of Shostakovich’s musical expression was a reaction to suffering, denunciation -- really, any of the things that were happening politically and personally.

Just like certain teenagers today, Shostakovich stood up against his government and stealthily rallied against it -- not publicly, of course, but through his compositions. He even dedicated his 8th string quartet "to the victims of fascism and war." Stalin had an anti-formalist campaign and often accused Shostakovich of being too “formalist” (Stalin demanded that all Soviet composers only write “proletarian” music, or music for the masses). But like many confused teenagers, Shostakovich was a complex person and in later years ended up joining the Communist party. The reasons he did so are debatable and open to several interpretations; the actual reason he did so is anyone’s guess. Who knows why any teen (or Shostakovich) does anything, anyway?

Shostakovich obviously had tough circumstances and inner conflicts. He was often torn between having his own opinions and having to do something to please authority (so he wouldn’t be killed or denounced). While the consequences of rebellion were drastially different for Shostakovich than for teenagers, the basic circumstances are not: one person seeking independence from a whole legion of authority figures. Luckily, most American teens only encounter authority figures at school (teachers), work (supervisors), or home (parents) and not in Stalingrad. Yikes!

What are some other similarities between Shostakovich and teenagers? Well, Shostakovich loved watching soccer and playing card games. He liked to drink and party and reportedly danced on top of pianos (things teenagers definitely do not do, right?). He was also quite fond of satirical writers.

If you would like to find a way to get a teenager interested in classical music, Shostakovich might be the way to go. However, at the end of the day, I believe that the greatest reason that teenagers are so drawn to Dmitri Shostakovich is that he looks just like Harry Potter.