Are Violin Strings Really Made of Cat Guts?

At some point, most kids will have another kid tell them that violin strings (not to mention stitches and tennis rackets) are made of cat intestines, or “catgut”. It’s a classic gross-out, especially effective if the kid on the receiving end is the type to be squeamish about, say, dissecting a frog.

Is it true, though? Are violin strings actually made of cat guts? Well, not quite, but it isn’t far from the truth, especially historically. 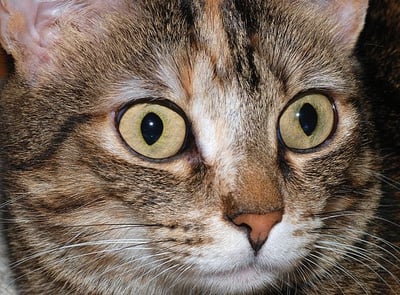 Animal intestines were indeed the standard string material for centuries. According to Greek mythology, Hermes strung the first lyre with the entrails of cows he’d stolen from his brother Apollo. When Apollo went to punish Hermes, he was lulled into complacency by the sound of the lyre. Apollo loved the sound so much, in fact, he offered Hermes all of his herds, plus all the animals of the forest, in exchange for the instrument (and you thought a Stradivarius was expensive!). Apollo wasn’t the only one in ancient times who liked the sound of someone strumming on intestines: in Egypt, instruments with strings made of guts would also prove to be all the rage.

Was catgut ever actually made of cat intestines, though? Rarely at best (it’s a big world out there… surely someone tried it at some point!). Cat intestines, as one might imagine, are relatively short, and are considerably more delicate than that of other, larger animals. Sheep, goats, and cows were, and remain, the animals whose guts are most typically used in the manufacture of violin strings.

Though there’s some argument on this, it is commonly believed that the name “catgut” is actually rooted in “kytte gut”, with a kytte being a kind of medieval proto-violin. Other popular theories are that the name refers to the German city of Catagniny — where strings were in high demand at the time — or that it was possibly a shortening of “cattlegut”. 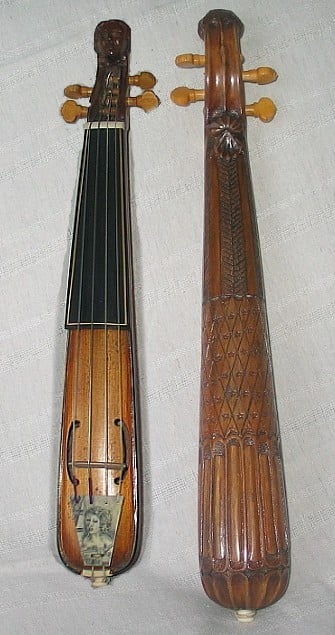 A kytte (also known as a pochette). Licensed under the Creative Commons Attribution-Share Alike 3.0 Unported license.

Wait, though, back up: did we say that sheep and cow guts are still in use in violin strings?

They are indeed, though the practice is much less common than it once was. Catgut strings are prized by many professional violinists, violists, cellists, and bassists for their warm, supple tone. Nowadays, these strings are commonly wound with various kinds of metal (usually tungsten, silver, or steel), but a brave few prefer the tone of bare gut. Catgut strings yield a supple, organic sound, but it requires some special techniques to pull the best sound from them.

Catgut strings are not in common use by modern non-professionals. Students often start with steel core strings such as D’Addario Prelude or Red Label, which are not as rich in tone but are much easier to play and keep in tune. Intermediate and advanced players will typically move on to strings with a synthetic core, like Evah Pirazzi, Il Cannone, or Dominant, which are able to replicate some of the nuances of catgut strings while maintaining some of the ease of steel strings. Even many modern professionals express a preference for strings with a synthetic core, due to their greater stability and longer lifespan.

Some players, especially people looking for vegan options for playing violin, may be squeamish about using animal products for strings. That’s perfectly fine: go with your gut (😉)! That said, there is a distinct difference in sound between the types of strings; just as the only real way to learn about the inside of that frog is to dissect it, the only way to get a catgut string sound is with catgut strings.