Why You Should Only Buy the Original Tourte Mute

Differences are invisible until discovered. A common picture riddle found in children’s coloring books includes a number of seemingly identical snow men (or teddy bears, men in raincoats with umbrellas, etc.), one of which has a slight difference. Which of these is not like the others? The child looks at the three or four snowmen bewildered, even frustrated, until aha! This snowman is missing a button. The child circles the unfashionable snowman, and turns the page.

Now, imagine if the book had instead asked the child, Which snowman do you like most? From my experience, I would guess that most children would look at the four seemingly similar snowmen, circle a seemingly random choice, smile at their new friend who is now named Brian the Snowman, and turn the page, completely unaware that one of the snowmen was missing a button. However, did the missing button still influence their opinion? If the child had consciously acknowledged the missing button, would the choice be different? Or, was the choice simply at random? At this point, I must confess that I am not a psychologist or a philosopher, and this article is not based on any empirical data of any kind. That being said, now it’s your turn! Which of these is not like the others?

While that was probably a fairly easy task, consider if you had been asked Which of these would you prefer? I use this example for a few reasons: mutes are very simple, a mute purchase is probably one of the least thought about purchases a string player makes, and it gives me a chance to reveal the answer to everyone’s dying question, Is the authentic Tourte mute better than the imitation, and why should I care?

Starting with why you should care, I’d like you to consider a particular moment that you’ve probably had during a lesson (one that I find quite common): Your teacher stops you in the middle of a piece to have you retry a section. They then coach you through it a few times, and on the fourth or fifth try they jump up and shout, Yes! That was it! Did you hear it?! You didn’t hear it, but are so eager to move on that you nod your head anyway. Later on in the practice room, you go over this part of your lesson, and realize that the teacher was right – there is a clear difference. How did I not hear that? This is a scenario that has been a regular part of my life since I was seven, and I’m quite certain now that the journey to becoming a better violinist is merely the repetitive task of discovering a very subtle difference in the way something sounds, feels, or is positioned, and then acknowledging that one is at least slightly better and improving on that difference. 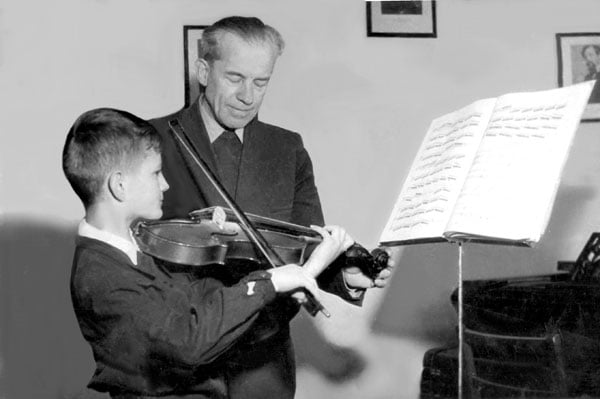 The task of discovering hidden differences and discerning the better option is a lifelong endeavor that applies both to practicing technique, and to the selection and maintenance of instruments and accessories. The above mutes do in fact have differences that go beyond mere appearance. The original mute has a more flexible rubber that is molded, rather than a stock piece of stamped rubber. The softness and manufacturing process of the original allows the mute to grip the string and the bridge better, reducing rattling and the possibility of falling off of the bridge. The material also effects the way it absorbs vibrations, giving each mute different tonal characteristics. Because the imitation mute has less grip and elasticity, the grooves into which the string or bridge are pressed have to be deeper, which means that fast mute changes are more likely to fail. Also, the original Tourte has a wider opening on one side, which prevents buzzing or pitch change by avoiding contact with the vibrating string. The differences are subtle, but they exist, and there is indeed a better option. Can you hear it? Perhaps, the real question is: can you hear it yet? 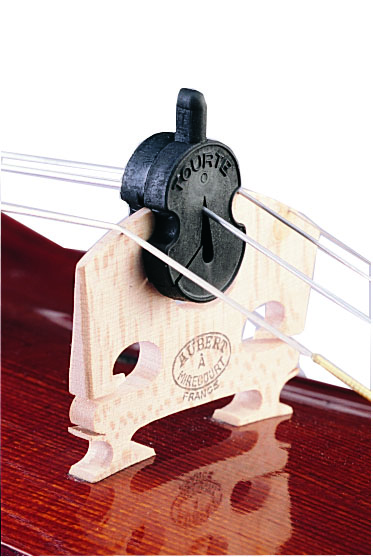 This point isn’t just to be made about mutes, as it especially applies to instruments, strings, and more complicated accessories. On the complete other end of the spectrum from mutes - there recently was a study done where a room full of professional violinists were blindfolded and asked to guess which of two instruments played was a Stradivarius, and which was a modern violin. Most of the listeners failed to identify the instruments properly, and so many came to the conclusion that there in fact is no difference between a Strad and a modern violin, or that perhaps Strads are not as great as we thought. However, what if the listeners instead listened to these two different violins every day for months, instead of making an immediate decision after listening for a short while on one day? What if they were only asked to discuss the differences in sound, and thereby developed a better understanding of the differences in each violin, the few who might hear a slight difference pointing it out to the others until they too hear it? Would a concert audience react differently to a concerto played on a Strad as opposed to a modern violin if they weren’t even asked to discern any difference?

In the end, I think we all lie on a continuum between the child holding a crayon and Sherlock Holmes in X-ray goggles. But I urge you: be more like Holmes. Often differences are overlooked, and sometimes they can’t be identified immediately just by looking at (or listening to) two comprable objects, like a Strad and a superb modern violin. For this reason, it is often important to take the recommendation of expert players and luthiers when choosing an instrument, case, shoulder rest, or mute. Get recommendations from experienced listeners, and take quick opinions with a grain of salt. Luckily at SHAR, we have lots of employees and customers who discover differences all day every day, and they are very capable at choosing better products, recommending better instruments, and pointing out differences you would never have thought to look for. Feel free to call us 1(800) 248-7427 for recommendations on accesories, instruments, and more. Think of it like taking the advice of your teacher or a colleague. You may find that they were right, and that you are making progress! Alternatively, you can begin shopping for Tourte Mutes by clicking on the button below.